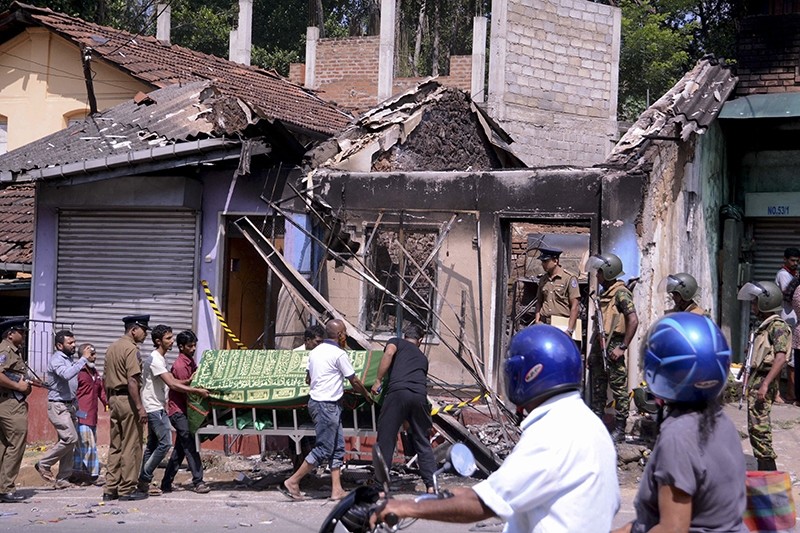 Sri Lankan police personnel stand near a vandalized building as they prepare to remove the body of a man who was killed in Digana, a suburb of Kandy, Sri Lanka, March 6, 2018. (AP Photo)
by Compiled from Wire Services Mar 06, 2018 12:00 am

Buddhist mobs attacked mosques and businesses belonging to Sri Lanka's minority Muslims overnight, police said Wednesday, despite the imposition of a state of emergency to restore peace in the bitterly-divided island.

Sri Lanka on Tuesday declared a nationwide state of emergency after riots targeting Muslims left at least two people dead and homes ablaze in a hill station popular with tourists.

But police spokesman Ruwan Gunasekara said there had been "several incidents" throughout Tuesday night in the Kandy area, popular with tourists for its tea gardens.

"The police arrested seven people. Three police officers were injured from the incidents," Gunasekara told Reuters. There was no information about how many civilians had been injured in the attacks, he said.

An internet company official said Wednesday the government had ordered popular social media networks blocked across a swathe of central Sri Lanka in an attempt to stop the spread of violence.

The official, speaking on condition of anonymity under company policy, said the networks, including Facebook, Instagram, Viber and WhatsApp, were blocked in the central hills, the scene of the violence. Outside of that region, though, many people were also unable to access the social media sites.

The government on Tuesday said it was imposing the extraordinary measures after police failed to curb violence in Kandy.

Heavily-armed police commandos were deployed to restore order after rioters defied an overnight curfew and went on the rampage.

He said an inquiry had also been opened into security lapses by police that allowed mobs of Sinhalese rioters to burn mosques as well as homes and businesses belonging to Muslims.

The body of a 24-year-old Muslim man was pulled out of a burnt home on Tuesday. Police said two dozen people had been arrested in the wake of the riots.

The emergency measures, imposed for the first time since 2011, give authorities sweeping powers to arrest and detain suspects for long periods and deploy forces where needed.

President Maithripala Sirisena said the measures would "redress the unsatisfactory security situation prevailing in certain parts of the country."

"The police and armed forces have been suitably empowered to deal with criminal elements in the society and urgently restore normalcy," he said.

City planning minister Rauff Hakeem described the riots as a "monumental security lapse" and recommended disciplinary action against those responsible for allowing the situation to deteriorate.

Sri Lanka's parliament Tuesday issued an apology to its Muslim minority, which constitutes 10 percent of the country's population of 21 million.

The violence in Kandy, a serene region of verdant hills frequented by tourists and pilgrims, has threatened to reignite communal tensions that have roiled Sri Lanka in recent weeks.

The emergency declaration was made after a special cabinet meeting with President Sirisena.

It is the first time in seven years Sri Lanka has resorted to such a measure. The island nation was under a state of emergency for nearly three decades as government forces battled Tamil rebels in a civil war that ended in 2009.

Riots erupted on Monday after a man from the island's mainly Buddhist Sinhalese majority died at the hands of a Muslim mob last week.

Hakeem said the riots were concentrated in Kandy, but the government wanted to send a strong message following recent outbreaks of communal violence elsewhere in the country.

Mobs set fire to Muslim-owned businesses and attacked a mosque in the east of the country last week after a Muslim chef was accused of adding contraceptives to food sold to Sinhalese customers.

The government dismissed the allegation as baseless and ordered the arrest of those fomenting unrest in the area.

Last November riots in the south of the island left one man dead and homes and vehicles damaged.

In June 2014 riots between Buddhists and Muslims left four dead and many injured.

That bout of violence was instigated by a Buddhist extremist group whose leaders are on trial, accused of spurring religious conflict.