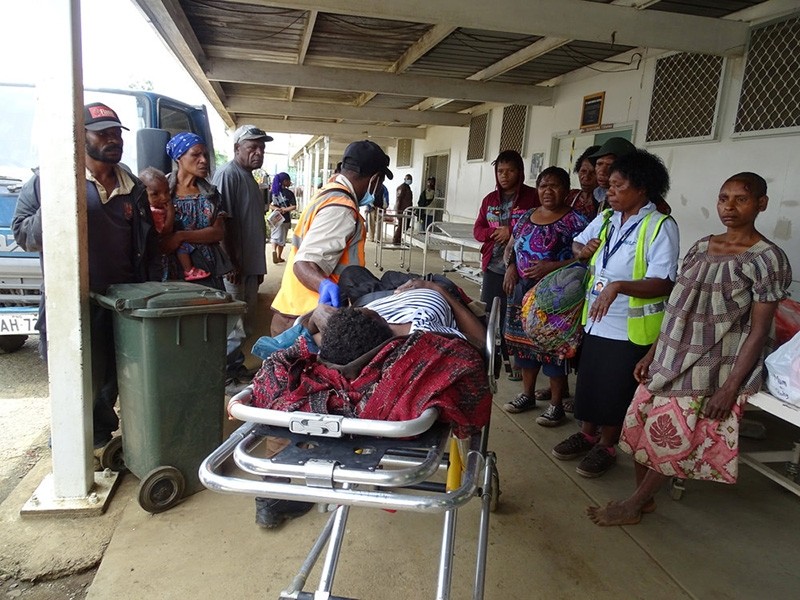 A resident receives medical treatment after an earthquake in Papua New Guinea in this handout image released March 7, 2018. (Reuters Photo)
by Mar 07, 2018 12:00 am

At least 25 people have been killed in a powerful 6.7-magnitude aftershock that struck the remote highlands of earthquake-rattled Papua New Guinea, officials said Wednesday, bringing the total death toll to more than 100 since last week.

The tremor was the most severe in a series of more than 100 aftershocks to hit the South Pacific country in recent days.

It struck overnight close to the epicenter of last week's magnitude-7.5 quake in the border region of Hela and Southern Highland provinces, 600 kilometers from the capital Port Moresby.

"At least 18 people were killed in Como district and two were killed in another district in the overnight earthquake," William Bando, Hela Province administrator, told German Press Agency (DPA) on Wednesday.

The devastating quake on Feb. 26 destroyed buildings, flattened several villages, caused massive landslides, severed communications and damaged many roads. Power is still out in most quake-hit regions of the country, which is one of the poorest in Asia.

Bando said more than 100 people have been killed so far. Until Tuesday, PNG's disaster management authorities put the death toll between 67 and 75.

"Relief efforts have been extremely slow and hard due to the damaged roads and communication difficulties," said Udaya Regmi, the head of the International Federation of Red Cross and Red Crescent Societies (IFRC) in PNG.

"The villagers need health support right now as most health centers have been damaged," he told DPA on Wednesday.

Relief workers have raised security concerns due to ongoing low-level tribal conflict. The area also has had to endure drought in the past.

"The first batch of food supplies came in this morning. And we are ready to send it to the affected villages," Eluh said.

"Apart from the damages to the infrastructure, including in capital Mendi, the most immediate need is for medical supplies and for basic needs like food and shelter for those who have been displaced and have congregated at various relief centers."

Australia and New Zealand announced that they would increase aid and humanitarian support to PNG, including sending defense forces with medical supplies, relief items, bed mats, and tarpaulins for tents.

Various oil and mining companies have shut down their operations in the quake zone, including Exxon-Mobil, the operator of PNG's biggest resources development, the PNG LNG project, worth $19 billion.

Bando also said the villagers have asked the PNG government in Port Moresby to launch an official inquiry into the cause of the quake.

"People here believe that the earthquake is man-made due to excessive oil and gas extraction by the extractive industries, like Exxon-Mobil. So they have demanded for an independent inquiry," he said.

Locals have argued on the social media the highlands are not close to the Pacific Rim Of Fire where earthquakes and volcanoes are normally experienced and so the tremors were due to underground extractions.