'Acts of genocide' suspected against Rohingya in Myanmar, UN says 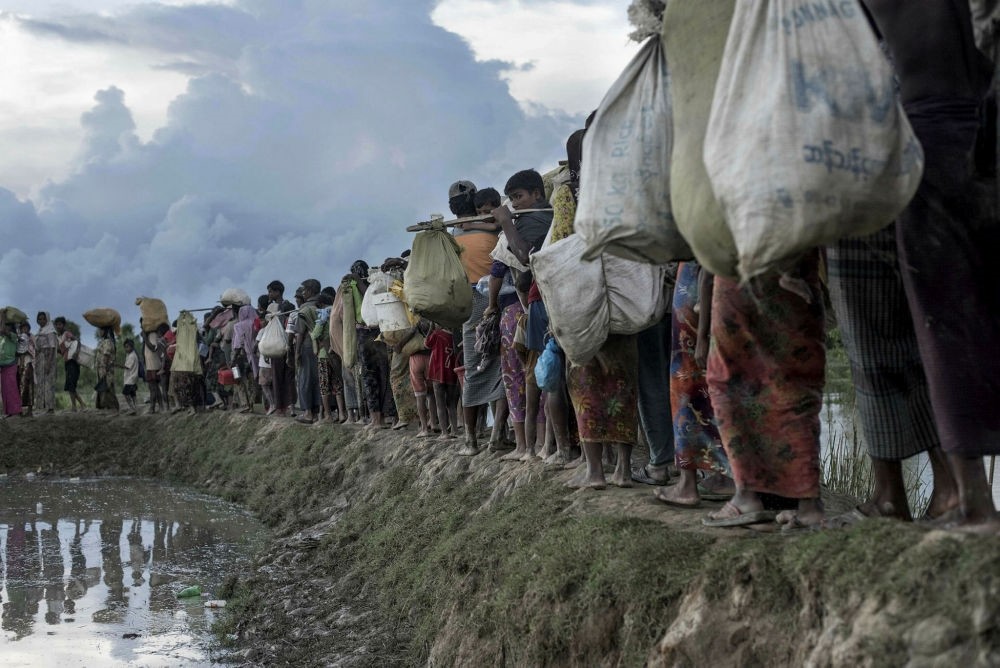 Rohingya refugees walk after crossing the Naf river from Myanmar into Bangladesh in Whaikhyang.
by Compiled from Wire Services Mar 08, 2018 12:00 am

More than six months after insurgent attacks that have killed at least 9,000 people in Rakhine state, the U.N. human rights chief said he suspected ‘acts of genocide' against Rohingya Muslim minority

The United Nations human rights chief said yesterday that he strongly suspected that "acts of genocide" might have taken place against Muslim Rohingyas in Myanmar's northern Rakhine state since August.

Reports of bulldozing of alleged mass graves showed a "deliberate attempt by the authorities to destroy evidence of potential international crimes, including possible crimes against humanity," Zeid Ra'ad al-Hussein added in a speech to the U.N. Human Rights Council, as reported by Reuters. Zeid noted that his office said on Tuesday that it believes ethnic cleansing is still underway in Rakhine. Rohingya are still fleeing because of "systematic" if lower-intensity persecution and violence there, he said.

"Victims have reported killings, rape, torture and abductions by the security forces and local militia, as well as apparently deliberate attempts to force the Rohingya to leave the area through starvation, with officials blocking their access to crops and food supplies," Zeid told the Geneva forum.

"This Council is aware that my office has strong suspicions that acts of genocide may have taken place in Rakhine State since August," he added.

His office had received reports of land inhabited by Rohingya being appropriated and members of other ethnic groups replacing them. "A recent announcement that seven soldiers and three police officers will be brought to justice for the alleged extra-judicial killing of 10 Rohingya men is grossly insufficient," he added. Myanmar's government must take steps to provide real accountability for violations and respect the rights of Rohingya, includi

At least 9,000 Rohingya were killed in Rakhine state from Aug. 25 to Sept. 24, according to Doctors without Borders. In a report last December, the global humanitarian group said the deaths of 71.7 percent, or 6,700 Rohingya, were caused by violence. The death toll includes 730 children below the age of 5. The U.N. has described the systematic violence by Myanmar against Rohingya Muslims in Rakhine state as possible genocide and ethnic cleansing.

Meanwhile, a senior Bangladesh cabinet minister has accused Myanmar of obstructing efforts to repatriate roughly 750,000 Rohingya refugees, saying it was unlikely the displaced Muslims would ever return to their homeland, according to AFP.

Bangladesh has reached an agreement with Myanmar to send back the around 750,000 refugees who have arrived since October 2016 over the next two years. But many Rohingya living in the crowded, unsanitary camps have said they do not want to return to Rakhine after fleeing atrocities including murder, rape and arson attacks on their homes. Rights groups and the U.N. say any repatriation must be voluntary. They have also expressed concerns about conditions in Myanmar where many Rohingya settlements have been burned to the ground by soldiers and Buddhist mobs.