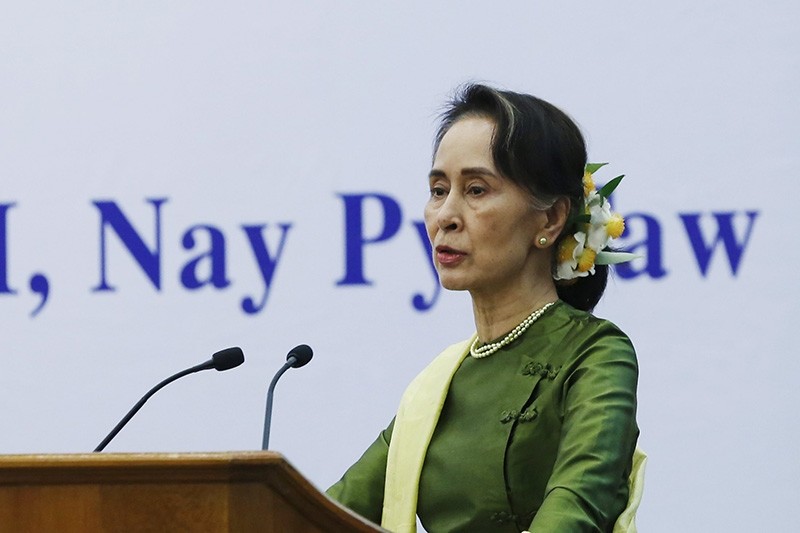 Myanmar's State Counselor Aung San Suu Kyi speaks during the Conference on Justice Sector Coordination For Rule of Law at the Myanmar International Convention Center 2 in Naypyitaw, Myanmar (EPA Photo)
by Mar 08, 2018 12:00 am

Suu Kyi, who won the Nobel Peace Prize in 1991 for her long campaign against the country's military dictatorship, was awarded the Holocaust Museum's Elie Wiesel award six years ago "for her courageous leadership and great personal sacrifice in resisting tyranny and advancing the freedom and dignity of the Burmese people."

But the Museum said it was rescinding the award due to her inaction over what it called "mounting evidence of genocide" committed by the Myanmar military against civilians from the Rohingya minority in Rakhine state.

"As the military's attacks against the Rohingya unfolded in 2016 and 2017, we had hoped that you -- as someone we and many others have celebrated for your commitment to human dignity and universal human rights -- would have done something to condemn and stop the military's brutal campaign and to express solidarity with the targeted Rohingya population," the museum said in a letter to Suu Kyi.

Instead, it said, her political party, the National League for Democracy, has refused to cooperate with U.N. investigators and added to the anti-Rohingya rhetoric.

The party has also obstructed journalists trying to report on the mass murder and expulsion to Bangladesh of the Rohingya.

"The military's orchestration of the crimes against Rohingya and the severity of the atrocities in recent months demand that you use your moral authority to address this situation," they said.

In November a joint report by the Museum and Southeast Asia-based watchdog Fortify Rights -- based on testimony they gathered in the field -- documented "widespread and systematic attacks" on Rohingya civilians.

The award was named after Elie Wiesel, a survivor of the Nazi genocide against Jews who spent much of his life campaigning for human rights, himself winning the Nobel Peace Prize in 1986.

Suu Kyi, the country's symbol of democracy for decades, has come under heavy criticism for her refusal to stand up for the Rohingya.

About 700,000 Rohingya have fled over the border to Bangladesh since August, with a horrifying testimony of murder, rape and arson by soldiers and vigilante mobs.

In January U.S. diplomat Bill Richardson resigned from a Suu Kyi-appointed panel set up to ease tensions with the Rohingya, assailing her for an "absence of moral leadership."

Various organizations have taken back honors bestowed on the onetime human rights icon, but Myanmar has rarely responded to the moves.

In a statement posted by a government spokesman on Wednesday, however, Myanmar's embassy in Washington said it regretted that the Museum had been "misled and exploited by people who failed to see the true situation" in Rakhine.

It added that the decision will have no bearing on local support for Suu Kyi but that it would "redouble its efforts in finding a lasting solution" to the crisis.