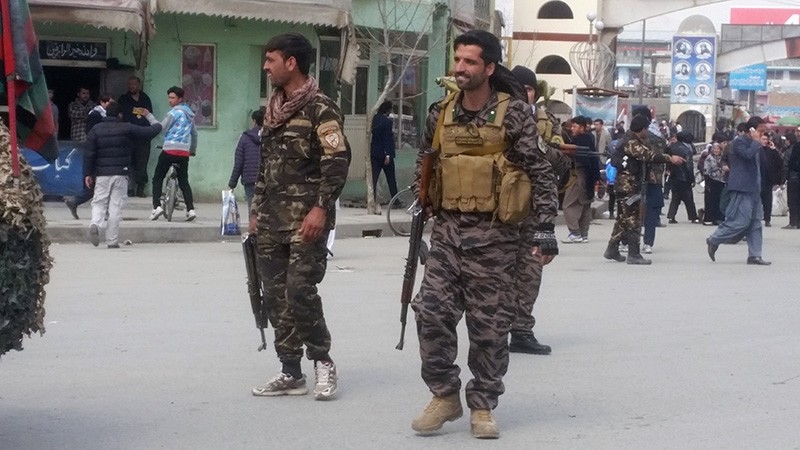 At least nine people were killed and more than 20 injured in a suspected suicide attack in Afghanistan's capital Kabul on Friday, according to media reports and a ministry official.

At least 18 people were injured in the attack in the Dasht-e Barchi area of the capital and transferred to hospitals across the city, said Wahidullah Majroh, a spokesman for the Afghan Health Ministry.

One policeman was among those killed in the attack, which happened near a gathering to mark the 23rd anniversary of the death of Abdul Ali Mazari -- a prominent former leader of the mainly Shiite Hazara ethnic community who was killed by the Taliban.

Hazaras are a predominantly Shiite ethnic group in Afghanistan who have been increasingly targeted by Daesh militants, who consider Shiites as heretics.

Daesh, or the Khorasan Province as its affiliate in Afghanistan is known, claimed responsibility in a posting on a Daesh-linked website. The terror group said it targeted a gathering of Shiites as they were commemorating the death of a "tyrant," an apparent reference to Mazari.

According to the U.N. Assistance Mission in Afghanistan, 161 people were killed and 257 others were injured in 2017 as a result of targeted sectarian attacks against Shiite places of worship or worshippers.

A Daesh terror attack on a Shiite cultural center in the same neighborhood in late December left 41 people dead and 80 others injured.

Meanwhile, in northern Afghanistan, the Taliban assaulted an army outpost overnight in an hours-long firefight, and ambushed policemen sent to help the troops, killing six soldiers and 10 members of the local police.

The overnight assault in northern Takhar province took place in a remote region of the district of Khwaja Ghar. The insurgents launched a siege of an army outpost there, killing six soldiers and wounding five in a blistering, hourslong attack, Defense Ministry spokesman Dawlat Waziri said.

Taliban spokesman Zabihullah Mujahid claimed responsibility for the assault late Thursday and the police slayings. He claimed the Taliban had inflicted a far higher number of casualties but the insurgents often exaggerate their claims. The report could not be independently confirmed because of the area's remoteness.

Mujahid, the Taliban spokesman, also claimed responsibility for that attack.

The attacks underscore the difficulties President Ashraf Ghani's government is facing as it battles a revamped Taliban insurgency and struggles to rein in the Daesh group, whose affiliate in Afghanistan has grown stronger since it emerged in 2014.

Kabul is one of the deadliest places in Afghanistan for civilians as both the Taliban and the expanding Daesh terrorist group step up their assaults on the city. Despite cautious optimism for a peace deal, Kabul remains on high alert, fearing further violence.

Ghani at an international conference in Kabul last week unveiled a plan to open talks with the insurgents, including eventually recognizing them as a political party. In return, Ghani said the militants should officially recognize the Afghan government and constitution, a perennial sticking point in past attempts to open talks.