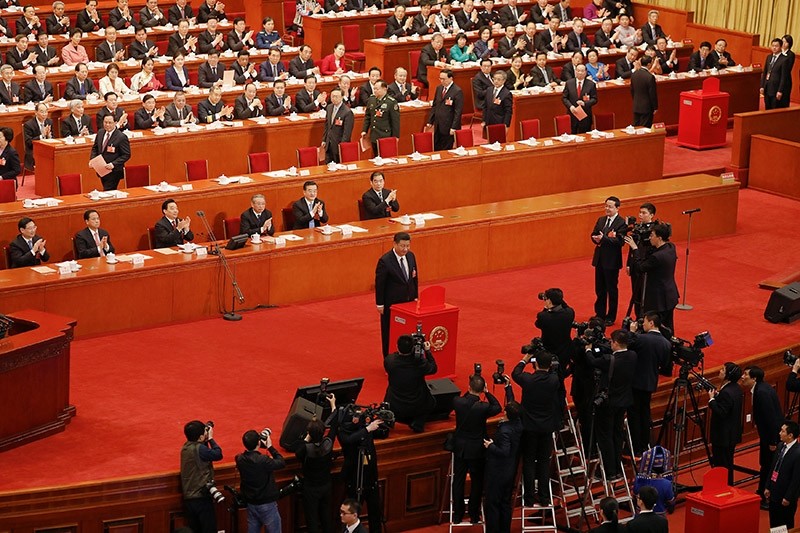 China's Xi Jinping secured Sunday a path to rule indefinitely as parliament abolished presidential term limits, handing him almost total authority to pursue a vision of transforming the nation into an economic and military superpower.

The move reverses the era of "collective" leadership and orderly succession that was promoted by late paramount leader Deng Xiaoping in 1976 to ensure stability following the turbulent one-man rule of Communist China's founder Mao Zedong.

The historic constitutional amendment cleared the rubber-stamp parliament with 2,958 in favor, two against, three abstentions and one invalid vote, despite an unusual bout of online criticism that censors have scrambled to extinguish.

Xi stood up first at the imposing Great Hall of the People in Beijing to cast his paper ballot in a red box, as delegates of the National People's Congress applauded after each vote on the constitutional amendment to lift the two five-year term limit for the presidency.

The first constitutional amendment in 14 years had been expected to breeze through the legislature, which has never rejected a Communist Party diktat in its half-century of existence.

"This is the urgent wish of the common people," Ju Xiuqin, a delegate from northeastern Heilongjiang province, told AFP, echoing party claims that lifting term limits had the unanimous support of "the masses."

Xi began his second five-year term as party chief in October and at the end of the week will be formally appointed by parliament to his second term as president.

The government has said lifting the term limits is about protecting the authority of the party with Xi at its center. The party's official People's Daily has said this does not mean life-long terms.

The party gave Xi the title of "core" leader in 2016, a significant strengthening of his position at the time.

The amendments also include inserting Xi's political theory into the constitution, something that was already done for the party constitution in October, and clauses to give a legal framework to a new super anti-corruption department.

While the presidency is important, Xi's positions as head of the party and head of the military are considered more important, and these titles are always given first by state media. With the passage of the amendment, now none of the posts have formal term limits.

In a further measure of Xi's strength, a key Xi ally, former top graft-buster Wang Qishan, could be elected vice president on Saturday, having stepped down from the Standing Committee in October.

He cast his vote right after the seven members of the Standing Committee. The amendment also lifts term limits for the vice presidency.

"We've not got around to discussing that yet," Chen Yunying, a senior defector from self-ruled Taiwan who is married to Justin Yifu Lin, the World Bank's former chief economist, as reported by Reuters. "We'll get it in the next few days," she told Reuters, referring to the candidate list for vice president, and adding "everyone has been saying" it will be Wang for the position.

In the run up to the vote, critics on social media attacked the move and drew parallels to North Korea or suggested a Mao Zedong-type cult of personality was forming. But the government quickly mounted a propaganda push, blocking some articles and publishing pieces praising the party.

The party loyalists who attend the annual session of parliament have said the decision is popular with ordinary Chinese people and asserted that China was lucky to have a leader of President Xi's caliber.