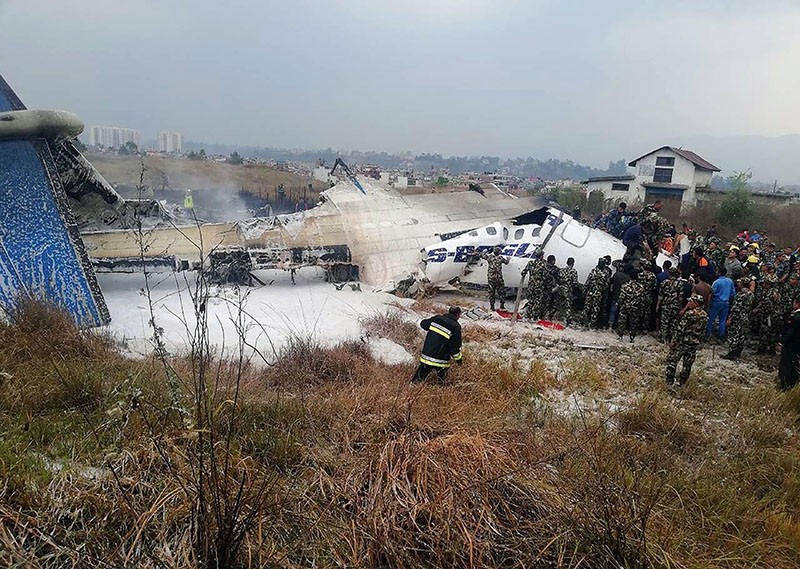 This picture obtained from the Twitter account of Saroj Basnet shows Nepali rescue workers gathering around the debris of an airplane that crashed near the international airport in Kathmandu on March 12, 2018. (AFP Photo)
by Daily Sabah with Agencies Mar 12, 2018 12:00 am

At least 49 passengers were killed, 22 others were injured after a Bangladesh passenger aircraft crashed at Tribhuvan International Airport in Nepal's capital Kathmandu after "becoming unstable while descending," an airport official said Monday.

Neupane said authorities had completed the search for bodies at the site.

"We will identify the dead tomorrow," he said.

Local media reported that 14 people, including four crew members, have been rescued with the death count not announced so far.

Witnesses said the twin-propeller aircraft broke into pieces and was engulfed in flames as the plane crash landed.

Those onboard included at least 30 Nepalis, some of whom were medical students and tourism businesspeople returning home after training in the Bangladesh, according to news website Nepal Khabar.

The other passengers were Bangladeshi and Chinese nationals, the website said.

Instead of landing properly, the aircraft swerved to the left and came close to the control tower of the airport, the Nepali Times newspaper reported.

The pilot's confusion while landing the plane from the eastern side of the runway had likely led to the crash, according to an analysis based on the conversation between the pilot and the air traffic controller published by the Nepali Times.

Amanda Summers, an American who works in Nepal, watched the crash happen from the terrace of her home office.

"It was flying so low I thought it was going to run into the mountains," she said. She said it was unclear if it had reached the runway when it landed. "All of a sudden there was a blast and then another blast," she said.

Fire crews put out the flames very quickly, perhaps within a minute, she said, though clouds of thick, dark smoke rose into the sky above Kathmandu, the capital of the Himalayan nation.

The airline, part of US-Bangla Group, is based in Dhaka and flies to several domestic and international destinations.

The parent company operates in a number of industries, including real estate, education and agriculture.

Nepal has been hit by air crashes in recent years, highlighting poor safety in the Himalayan country.

In September 2012, a Sita Air turboprop plane carrying trekkers to Mount Everest hit a bird and crashed shortly after takeoff, killing all 19 on board.

Twenty-three people were killed when a Twin Otter plane crashed on a mountainside in western Nepal. Two days later, two pilots of another plane were killed in a crash.

In March 2015, a Turkish Airlines plane skidded off the runway amid dense fog, but passengers only sustained minor injuries.