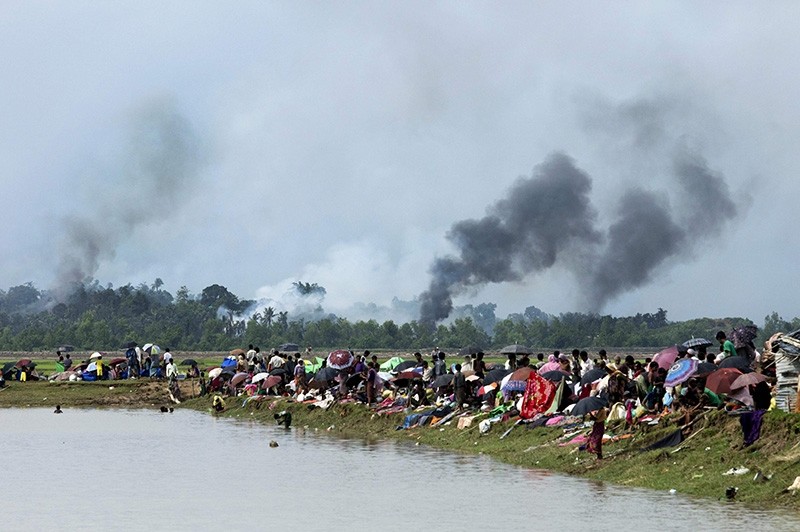 Smoke billows above what is believed to be a burning village in Myanmar's Rakhine state as members of the Rohingya Muslim minority take shelter in a no-man's land between Bangladesh and Myanmar (AFP Photo)
by Compiled from Wire Services Mar 12, 2018 12:00 am

In a move to destroy evidence of human rights abuses by the army, Myanmar is building military bases and other infrastructure over torched and flattened villages previously occupied by Rohingya, Amnesty International reports.

Myanmar's military is building installations on land in villages that had been occupied by Muslim Rohingya who fled to neighboring Bangladesh after their homes were burned down in what analysts charge was a campaign of ethnic cleansing by the authorities, Amnesty International said Monday.

The London-based rights group said that eyewitness testimony and analysis of satellite images established that Myanmar's Rakhine state is being militarized at an alarming pace with the construction of army bases, helipads and roads built in villages that had been burned and bulldozed.

"What we are seeing in Rakhine state is a land grab by the military on a dramatic scale," said Tirana Hassan, Amnesty International's Crisis Response Director, as reported by AP. "New bases are being erected to house the very same security forces that have committed crimes against humanity against Rohingya."

Myanmar government spokesman Zaw Htay says the bulldozing is mainly to prepare burned areas for resettlement and reconstruction. The government has denied burning down villages to drive out the Rohingya.

Rakhine state has been largely sealed off from rights groups, the media and United Nations investigators. Myanmar and Bangladesh were supposed to start repatriating Rohingya refugees in late January but many are reluctant to return to a place without guarantees of basic rights and safety. The report also highlights concerns that abandoned Rohingya land will be set aside for ethnic Rakhine Buddhists and other non-Muslim groups in the area, and that alterations to the landscape will erase evidence of alleged atrocities by the military.

Myanmar's government has pledged to accept back the Rohingya who fled, and it has been constructing shelters, including dozens at a large transit camp in northern Rakhine state near the Bangladesh border. But Amnesty International said the flattening of Rohingya villages and the new construction could make the voluntary, safe and dignified return of Rohingya refugees a distant prospect.

"The military is not only building security force bases and roads but also bulldozing everything including house, trees, landmarks and even graveyards," said Mohammad Ali, a Rohingya resident of Buthidaung town in northern Rakhine.

Satellite imagery of one village called Kan Kya on the outskirts of Rakhine's Maungdaw town taken two months after the August attacks shows a settlement scarred by fire. But by early March buildings could be seen on the revamped land. Amnesty believes they are part of a new base for security forces. Similar building activity was also detected in Inn Din village, where Myanmar has admitted that its security forces took part in the killings of 10 Rohingya residents in September.

The Rohingya trace their presence in Rakhine back centuries. But most people in majority-Buddhist Myanmar consider them to be unwanted Muslim immigrants from Bangladesh. The army refers to the Rohingya as "Bengalis," and most lack citizenship.

The stateless Rohingya have been the target of communal violence and vicious anti-Muslim sentiment in mainly Buddhist Myanmar for years. Myanmar has denied citizenship to Rohingya since 1982 and excludes them from the 135 ethnic groups it officially recognizes, which effectively renders them stateless.

An estimated 700,000 Rohingya have fled over the border to Bangladesh since an army crackdown was launched in Rakhine in August. Myanmar blames Rohingya militants for an Aug. 25 strike on security posts in Rakhine state that triggered a fierce army crackdown. The U.N. and the U.S. have said the retaliatory response by Myanmar security forces amounted to "ethnic cleansing."