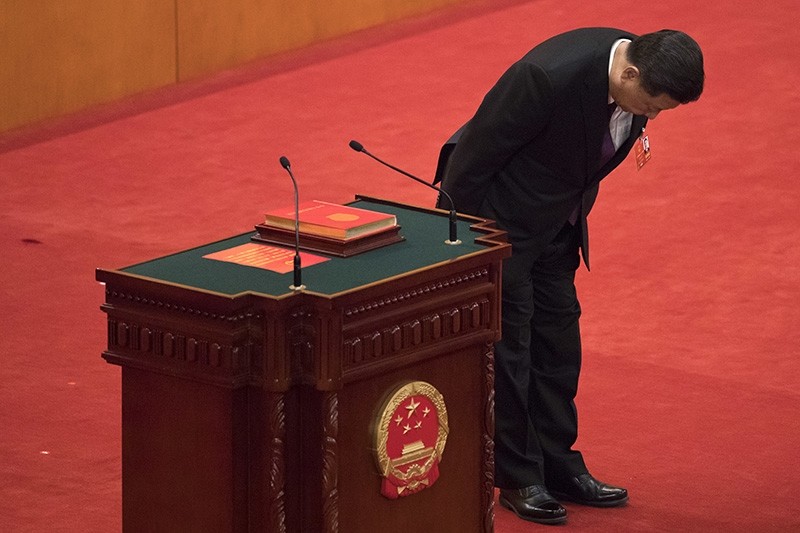 Xi Jinping bows after taking the oath of office after being formally re-elected to a second term as President during a plenary session of China's National People's Congress at the Great Hall of the People in Beijing, March 17, 2018. (AP Photo)
by Associated Press Mar 17, 2018 12:00 am

China's rubber-stamp legislature on Saturday unanimously approved the reappointment of Xi Jinping as president with no limit on the number of terms he can serve.

At the Great Hall of the People, Xi, Wang and other officials took turns stepping to the lectern to place their left hands on the constitution and raise their right fists as they delivered an oath swearing loyalty to the constitution, the motherland and the people.

All 2,970 members of the National People's Congress in attendance approved Xi's reappointment, while Wang received just one vote against.

Xi, who leads the ruling 90 million-member Communist Party, was also reappointed as head of the government commission that commands the military. He is already head of an identical party body overseeing the 2 million-member force.

Xi, 64, is considered the most powerful Chinese leader since Mao Zedong. Last weekend, he was given the right to continue in office indefinitely after the legislature scrapped term limits for the president and vice president.

Chinese officials defended the move, saying it would bring the presidency in line with Xi's other two main positions of head of the party and commander of the armed forces.

Critics say the move, which overturns a push to institutionalize China's ruling practices dating from 1982, will likely lead to increased political repression and possible infighting among party factions seeking to promote their own candidates within the closed system.

Xi took office as president in 2013 and hasn't said how many additional five-year terms he intends to serve. State media has said the removal of term limits will not alter conditions for retirement or create a president in perpetuity, but has offered no details.

Xi is expected to expand his yearslong campaign against corruption within the Communist Party to include all state employees through the creation of a new National Supervisory Commission, while continuing to pursue a muscular foreign policy and policies to upgrade the slowing economy.

Economic growth and social stability have allowed Xi to amend the constitution and carry out other moves that once seemed highly contentious, said Kerry Brown, professor of Chinese Studies and director of the Lau China Institute at King's College, London.

"Really no one is going to shout and moan too much" because growth and stability are considered so important, Brown said Friday in a talk to foreign media in Beijing.

As China's vice president, the 69-year-old Wang is expected to be a key element in furthering Xi's agenda of shoring up Communist Party rule while ending corruption and poverty.