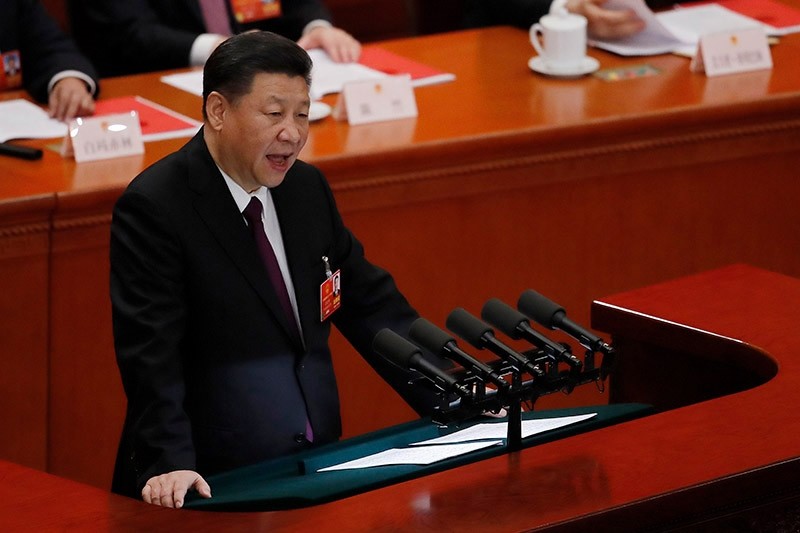 Chinese President Xi Jinping delivers a speech at the closing session of the annual National People's Congress (NPC) at the Great Hall of the People in Beijing. (AP Photo)
by Compiled from Wire Services Mar 20, 2018 12:00 am

Chinese President Xi Jinping called for the "great rejuvenation of the Chinese nation" and for his country to take its "due place in the world," in a nationalistic speech on Tuesday at the closing of the annual parliamentary session.

"The Chinese people have been indomitable and persistent," Xi told the almost 3,000 delegates in the cavernous Great Hall of the People in Beijing. "We are resolved to fight the bloody battle against our enemies."

"We have the strong capability to take our due place in the world," he said.

Xi, 64, used the two-week session to consolidate his position, with the rubber-stamp legislature amending the constitution to remove presidential term limits, effectively paving the way for him to rule indefinitely.

He was also unanimously elected to his second term as president, installed his closest aide as vice president and stacked key cabinet positions with his loyalists.

Xi warned against separatist movements and said China, which is currently involved in territorial disputes with its neighbors in the South and East China Seas, would safeguard its sovereignty and territorial integrity.

"Not a single inch of our land will be and can be ceded," he said.

On the topic of self-ruling Taiwan, which Beijing sees as a breakaway province, Xi said that efforts to separate it from the Chinese nation were doomed to fail.

Meanwhile, Premier Li Keqiang said Tuesday that China doesn't want to see a "trade war" with the United States and hopes to reach a negotiated settlement of disputes.

Speaking at a nationally televised news conference, Li said rash action would hurt all sides. He made no mention of a possible Chinese response to any increase in U.S. import controls.

Beijing faces mounting pressure from the government of U.S. President Donald Trump over complaints it hampers access to its markets, pressures foreign companies to hand over technology and is flooding foreign markets with unfairly low-priced steel and other goods.

That has prompted concern possible U.S. import controls might set off a cycle of retaliation by Beijing and other governments.

"No one will emerge a winner from a trade war," said Li. He said that would be contrary to trade rules based on negotiation and dialogue and would damage a mutually beneficial U.S.-Chinese trading relationship.

"What we hope is for us to act rationally rather than being led by emotions," he said. "We don't want to see a trade war."

Chinese trade officials said earlier that Beijing was ready to respond, though they gave no details. Business groups have suggested they could target U.S. exports of jetliners, soybeans and other goods for which China is a major market.

Asked whether Beijing might use its large holdings of U.S. government debt as leverage in a dispute, the premier said China's investments are based on market principles and "China will remain a responsible long-term investor."

Also Tuesday, Li promised China "will open even wider" to imports and investment and will fully open manufacturing industries to foreign competitors.

Beijing plans to eliminate import tariffs on drugs and slash duties on consumer goods, said Li. He said the country will "fully open the manufacturing sector," with better protection for intellectual property.

Chinese leaders are moving to make their slowing, state-dominated economy more productive. They have promised to open more industries to private and foreign competition, but business groups complain they are moving too slowly.

"If there is one thing that will be different from the past, that will be that China will open even wider," said Li.

"We will also fully open the manufacturing sector," said Li. "There will be no mandatory requirement for technology transfers and intellectual property rights will be better protected."

Beijing faces complaints it violates its market-opening commitments by requiring automakers and other foreign companies to hand over technology to potential Chinese competitors. Washington is investigating whether Beijing is acting improperly, a probe American officials have suggested might lead to trade penalties.