Members of the South Korea's art troupe perform during a rehearse ahead of a performance by a South Korean art troupe at the East Pyongyang Grand Theatre in Pyongyang, North Korea, 01 April 2018. (EPA Photo)
by reuters
Apr 02, 2018 12:00 am

North Korean leader Kim Jong Un and his wife, Ri Sol Ju, were among the hundreds in Pyongyang on Sunday watching South Korean K-pop singers perform in the North for the first time in more than a decade as tensions between the two countries thaw.

It was the first time a North Korean leader had attended a South Korean performance in the capital. Kim was seen clapping in tune to some of the songs and later took photographs with the performers after the show.

"Our dear leader comrade said his heart swelled and he was moved by the sight of his people deepen their understanding of South Korean popular culture and cheer with sincerity," said the North's state media. 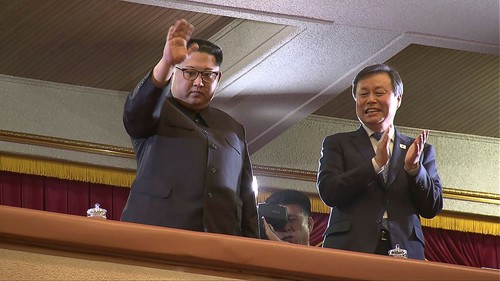 The North Korean audience clapped, cheered, sang along to some of the songs and later presented the South Korean performers with flower bouquets.

"(Kim Jong Un) showed much interest during the show and asked questions about the songs and lyrics," Culture Minister Do Jong-whan told reporters after the show. 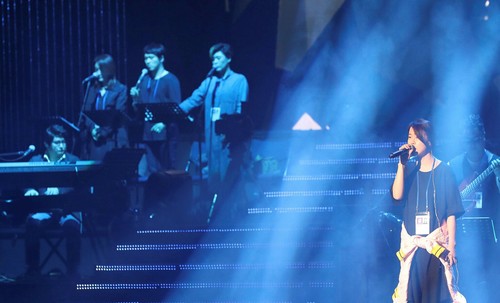 Like the concert title, the performance had brought a "spring of peace" to the two Koreas, Kim Jong Un was also cited as saying by the North's central news agency, and expressed wishes for a "prosperous autumn".

The North Korean leader's face was slightly flushed in a group photograph with the performers distributed by North Korean state media, while in another, he was seen directly addressing members of Red Velvet, which commands more than 4.6 million followers on Instagram.

Sunday's two-hour concert in Pyongyang, along with a separate taekwondo performance earlier in the day, came as South Korea's engagement with North Korea has continued to grow since Kim expressed his willingness for more contact between the two countries.

Athletes from North and South Korea marched under a unified peninsula flag at the opening ceremony at the Pyeongchang Winter Olympics in February and the significant thaw in the inter-Korean relations has led them to set a date for their first summit in more than a decade on April 27.

The two Koreas are technically still at war after the 1950-1953 conflict ended with a ceasefire rather than a peace agreement.

The South Korean delegation included artists, concert staff, taekwondo demonstrators, reporters and government officials. They travelled to Pyongyang on Saturday in a reciprocal cultural visit after North Korea sent performers to the South in February, the South's Culture Ministry said.

In addition to the concert, a team of South Korean taekwondo demonstrators performed on Sunday at the Pyongyang Taekwondo Hall, drawing more than 2,300 North Koreans, including Choe Hwi, chairman of the National Sports Guidance Committee.

Cho Yong-pil, a 68-year-old singer, sang a string of hits including "The Cafe in the Winter", "Short Hair" and "Let's Go on a Trip". Cho held a solo concert in Pyongyang in 2005 - the last concert by a South Korean artist in the North before Sunday's performance.

The same South Korean singers will hold a joint concert with North Korean performers on Tuesday at the Ryukyung Chung Ju Yung Gymnasium, a joint project between the North and South named after Hyundai Group billionaire founder Chung Ju-yung who had long advocated inter-Korean cultural and economic exchange.

Kim Jong Un had been planning to attend the Tuesday performance but decided to watch Sunday's show due to "political schedules", KCNA and South Korean officials there said.