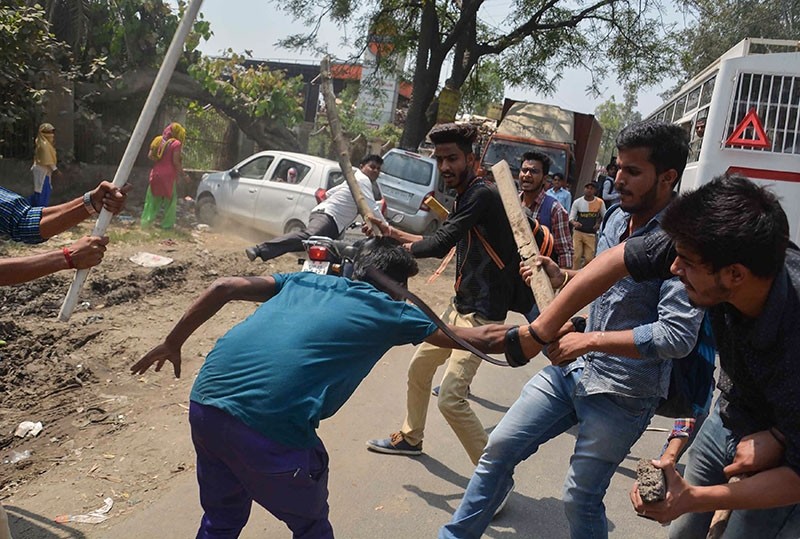 A protester (C) is beaten by Indian students after members of the Dalit community and other ,low caste, groups threw bricks at their college during countrywide protests, in Meerut in Uttar Pradesh state on April 2, 2018.
by reuters
Apr 03, 2018 12:00 am

At least seven people were killed Monday as protesters led by India's Dalits set fire to police posts and blocked railway tracks after the Supreme Court barred the immediate arrest of people accused of discriminating against them, local media said.

Four people were killed in the central state of Madhya Pradesh, where police also imposed a curfew, Indian television channels reported. Three others were killed in other states, local media said.

Reuters could not independently confirm the death toll.

Prime Minister Narendra Modi's government submitted a review petition to the Supreme Court on Monday, asking it to amend the March 20 judgment that sparked the protests, Home Minister Rajnath Singh said in a televised interview.

Dalits are at the bottom of India's ancient caste hierarchy and together with the scheduled tribes - indigenous peoples who are often isolated or disadvantaged - form about a quarter of the population. Protesters carried banners demanding a nationwide shutdown, saying the judgment was diluting the law.

Violence was reported from other states such as Rajasthan, Uttar Pradesh, Jharkhand and Bihar, while exams have been postponed and internet services have been shut down due to clashes in Punjab.

Dalit organizations called for protests after the Supreme Court ruled last month that arrests under a law meant to speed action on complaints of violence against Dalits required prior approval from officials, and barred the immediate arrest of those accused in such complaints.

"Get out in strong numbers, block the roads if needed, but do not touch public property," Jignesh Mevani, an independent Dalit lawmaker from the western state of Gujarat, told the India Today news channel.

Although he backed the protests, Mevani said, he was opposed to any damage to public property.

Shops were shut as protesters blocked key roads in many areas, including the capital, New Delhi, and the industrial city of Ahmedabad in Modi's home state of Gujarat, the Times of India newspaper reported.

By the end of 2016, about 90 percent of roughly 145,000 cases involving Dalits were still awaiting trial, government data from last year showed.

Investigation showed that fewer than a tenth of the cases brought by Dalits in 2016 were proved false, according to government data.

Hindus, who account for about four-fifths of India's population of 1.3 billion, were traditionally grouped into thousands of castes, whose membership was determined by birth.

Dalits have historically faced various forms of discrimination including segregation and social boycott, in addition to violence.

They have been barred from physical or social contact, and in some cases, even having their shadows touch those belonging to people from castes higher in the hierarchy.

The rigid Hindu caste system also forces some Dalit castes into occupations which are considered unclean by the so-called higher castes, such as cleaning human excreta and disposing of dead people and animals.