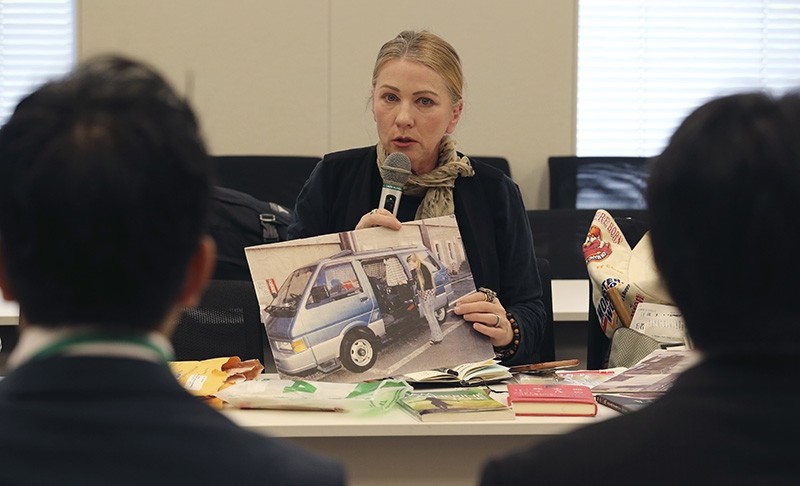 Catherine Fisher of Australia speaks during a meeting with Japanese government officials in Tokyo, Friday, April 6, 2018. (AP Photo)
by Associated Press Apr 06, 2018 12:00 am

A woman who says she was raped by a U.S. sailor in Japan is demanding Tokyo do more to protect crime victims of U.S. military personnel stationed here.

Catherine Fisher met for an hour Friday with foreign and defense ministry officials in the Japanese parliament.

Fisher, an Australian and longtime Japan resident, was raped in 2002, and awarded damages by a Japanese civil court. Japanese prosecutors however refused to pursue criminal charges.

She tracked the sailor she accused of assaulting her on her own because he had already left for the U.S.

Fisher sued Bloke Deans in Wisconsin Circuit Court in 2012 to claim the damages awarded in Japan. She won in 2013, but demanded only $1 — to make a point, she says.

Deans denied he assaulted Fisher but acknowledged in the U.S. settlement "the evidence may prove otherwise," according to documents provided by his attorney, Alex Flynn. "Mr. Deans has paid that dollar and the matter is now concluded," Flynn said.

Fisher is now demanding compensation for the family of a Japanese woman in whose death a former Marine was convicted last year, as well as for other victims.

Such crimes by U.S. military personnel have set off anger although their immunity from Japanese prosecution has gradually decreased.

"You must and you can do something. Everybody else is doing something except for the Japanese government," she said, referring to the growing global #MeToo movement against sexual misconduct.

Takahiro Suzuki, a deputy director at the Ministry of Foreign Affairs, told Fisher negotiations were underway with the U.S. to win compensation for the family of the murdered Japanese woman.

A sticking point has been that, at the time of the murder, Kenneth Shinzato was working as a U.S. military contractor and was no longer a Marine.

Fisher demanded the Japanese government give compensation immediately, and not wait for a U.S. decision.

She has been a rare proponent and counsel for women in Japan, where rape victims tend to stay silent.

Although opinion may be divided about the presence of U.S. troops in Japan under a bilateral treaty, there was no disagreement that murder and rape were wrong, she said.

"You couldn't stop that," she told the officials of the crime. "You have to take responsibility."