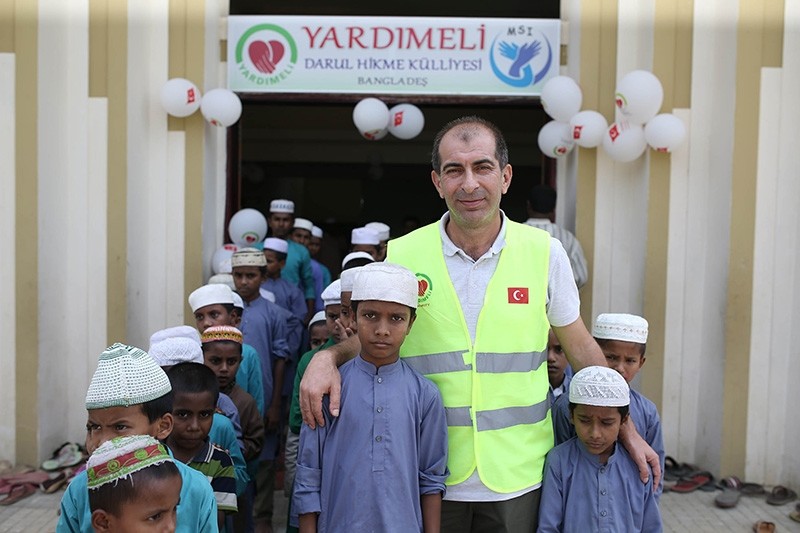 A Turkish delegation of lawmakers and officials from the Turkish Disaster and Emergency Management Authority (AFAD) visited an orphanage in Bangladesh's Cox's Bazar on Sunday.

The delegation played with the children and received information about the work at the orphanage and education complex which was established by the Turkey-based Yardımeli aid agency.

The Yardımeli Darul Hikme Education and Social Complex, a three-floor school building along with a mosque, was built on an area of 12,000 square meters (129,166 square feet). The school building has 20 classrooms, five dormitory rooms for orphans and two large halls for social activities.

Speaking to Anadolu Agency, Yardımeli's Bangladesh coordinator Mehmet Akif Citil said the Rohingya orphans and Bangladeshi children in need are receiving education at the complex which is the largest in the region.

"We have been operating in the region since 2008. Since the crisis intensified, we continued to be with our Bangladeshi and Arakanese children with the opening of more than 400 deep water wells, orphanages and schools," he said.

Muhammed Suheyl, 10, one of the children at the orphanage, said he lost his father in an accident three months ago.

"I live a good life here. The teachers are treating us good, it is nice to receive education," said Suheyl, who has seven siblings.

The U.N. has documented mass gang rapes, killings -- including of infants and young children -- brutal beatings and disappearances committed by security personnel. In a report, U.N. investigators said such violations may have constituted crimes against humanity.