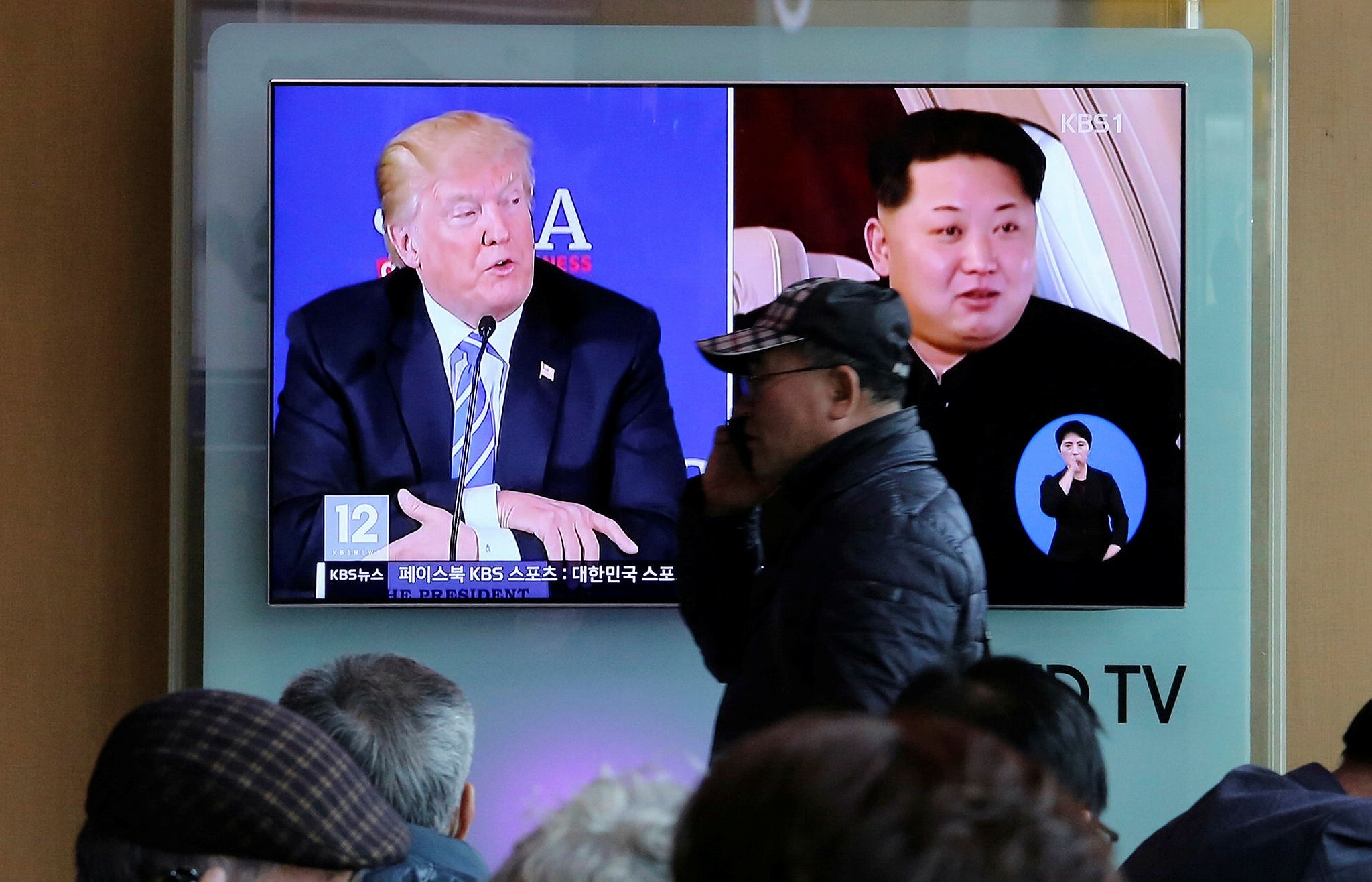 A man passes by a TV screen showing file footage of U.S. President Donald Trump (L) and North Korean leader Kim Jong-Un during a news program at the Seoul Railway Station, April 9.
by Compiled from Wire Services Apr 11, 2018 12:00 am

North Korea's state media has reported that Kim briefed top party officials on his vision for the future of dialogue with the U.S. and his upcoming summit with South Korea's president

Kim Jong Un gave his "profound analysis and appraisal" of the prospects for the North Korea-U.S. dialogue at a meeting of the Politburo of the ruling party's Central Committee, the Korean Central News Agency (KCNA) reported. The meeting was held on Monday.

The KCNA report did not specifically mention plans for Kim to hold a summit with President Donald Trump, expected in May or June, but it suggests Pyongyang is actively preparing for the meeting and is ready to let North Koreans know big events may be ahead.

North Korea's official media has thus far made virtually no mention of the series of stunning diplomatic overtures Kim has made toward Seoul and Washington since January, though it did trumpet Kim's visit to Beijing last month to meet with Chinese leader Xi Jinping.

That was the first time Kim has left North Korea since assuming power in 2011 and was also his first meeting with another head of state.

North Korean Foreign Minister Ri Yong Ho has also been active as he arrived in Moscow on Monday after stopping in Beijing. He also paid a not-well known visit last month to Sweden, which acts as a diplomatic go-between for Washington and Pyongyang.

North Korea's parliament, called the Supreme People's Assembly, is scheduled to convene Wednesday. The assembly generally convenes once a year to approve the national budget and other policy and personnel issues that have already been decided on by Kim and the party leadership.

According to the KCNA report, the party leaders who met Monday approved a budget for this year that will be presented to the parliament.

It said Kim outlined in detail his analysis on the situation on the Korean Peninsula and mentioned the North-South summit, which will be held on the south side of the Demilitarized Zone (DMZ) on April 27.

He then discussed the "prospect of the DPRK-U.S. dialogue and set forth the strategic and tactical issues" to be maintained by the party.

Though the report did not explicitly mention plans for the summit with President Trump, it was the most concrete suggestion to date that Pyongyang is preparing for what would be the first-ever summit between a North Korean leader and a sitting U.S. president.

President Trump said Monday their meeting might be in late May or even in June. The location has yet to be announced.

The main issue at the summit will be North Korea's nuclear program.

Speaking at the White House on Monday, the president expressed hope that a deal to get Pyongyang to denuclearize might be made. Administration officials say the North has communicated that Kim is ready to discuss his nuclear weapons program.

Questions remain about what conditions Kim might tack on to any denuclearization agreement.

Today's parliament meeting could provide further clues as to what approach Kim might intend to take for the negotiation.

"Hopefully it will be a relationship that will be much different than it has been for many, many years."