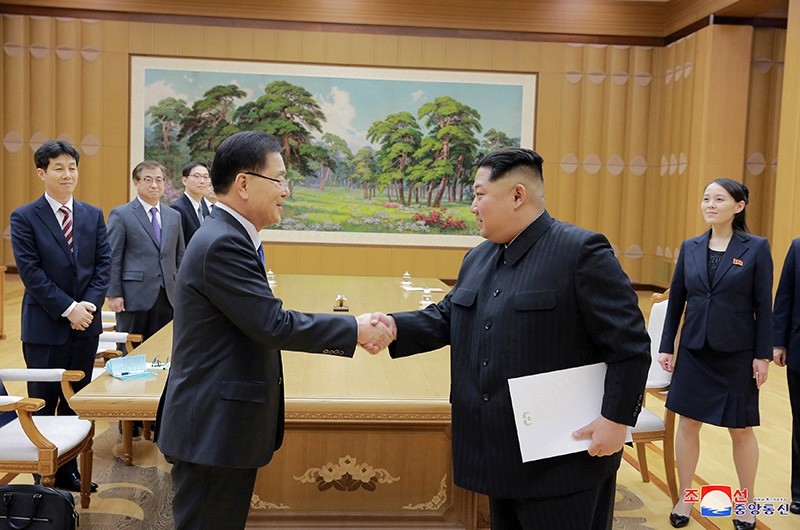 South Korea is seeking to open discussions about formally declaring an end to the war with the nuclear-armed North at a rare inter-Korean summit next week, officials said Wednesday.

"We are looking at the possibility of replacing the armistice regime on the Korean peninsula with a peace regime," a senior official at the presidential Blue House told reporters.

"But this is not something we can do by ourselves. It needs close discussions with relevant parties including North Korea."

The comments came after U.S. President Donald Trump said that the summit between North Korean leader Kim Jong Un and the South's President Moon Jae-in could, with his "blessing," discuss a peace treaty to formally close the conflict.

The 1950-53 Korean War ended in an armistice rather than a peace treaty, leaving the two sides technically at war. The Demilitarized Zone between them bristles with minefields and fortifications.

But while the U.S.-led United Nations command, China and North Korea are signatories to the decades-old armistice, South Korea is not.

Reaching any final treaty would be fraught with complications.

Both Pyongyang and Seoul claim sovereignty over the whole Korean peninsula, but a treaty could imply mutual recognition of each other.

The North would be likely to demand the withdrawal of U.S. troops, while the South's national security adviser Chung Eui-yong said Wednesday that Seoul and Washington wanted to see Pyongyang give up its nuclear ambitions.

In meetings with his newly-appointed U.S. counterpart John Bolton, the two had discussed ways to "establish an ultimate peace regime," but only if the North "makes the correct decision," he said.

Pyongyang has in the past demanded a peace treaty with the U.S., describing them as the two direct parties in the conflict.

"South Korea is a direct party. Who can argue that?" the Blue House official said.

The two Koreas could first reach an agreement which would be followed by a meeting between Kim and Trump and a trilateral summit to seal the deal, he suggested.

But four-party talks could also be needed, he added, in a reference to China.

But he cautioned "I am not sure if we will use the expression 'ending the war'" at the summit. "We want to reach an agreement on banning hostile activities between the South and North," he added.

The two Koreas will hold what will be their third summit since the 1950-53 Korean War next Friday, with a subsequent meeting planned between Kim and Trump -- which would be the first time a sitting U.S. president had met the North's leader.