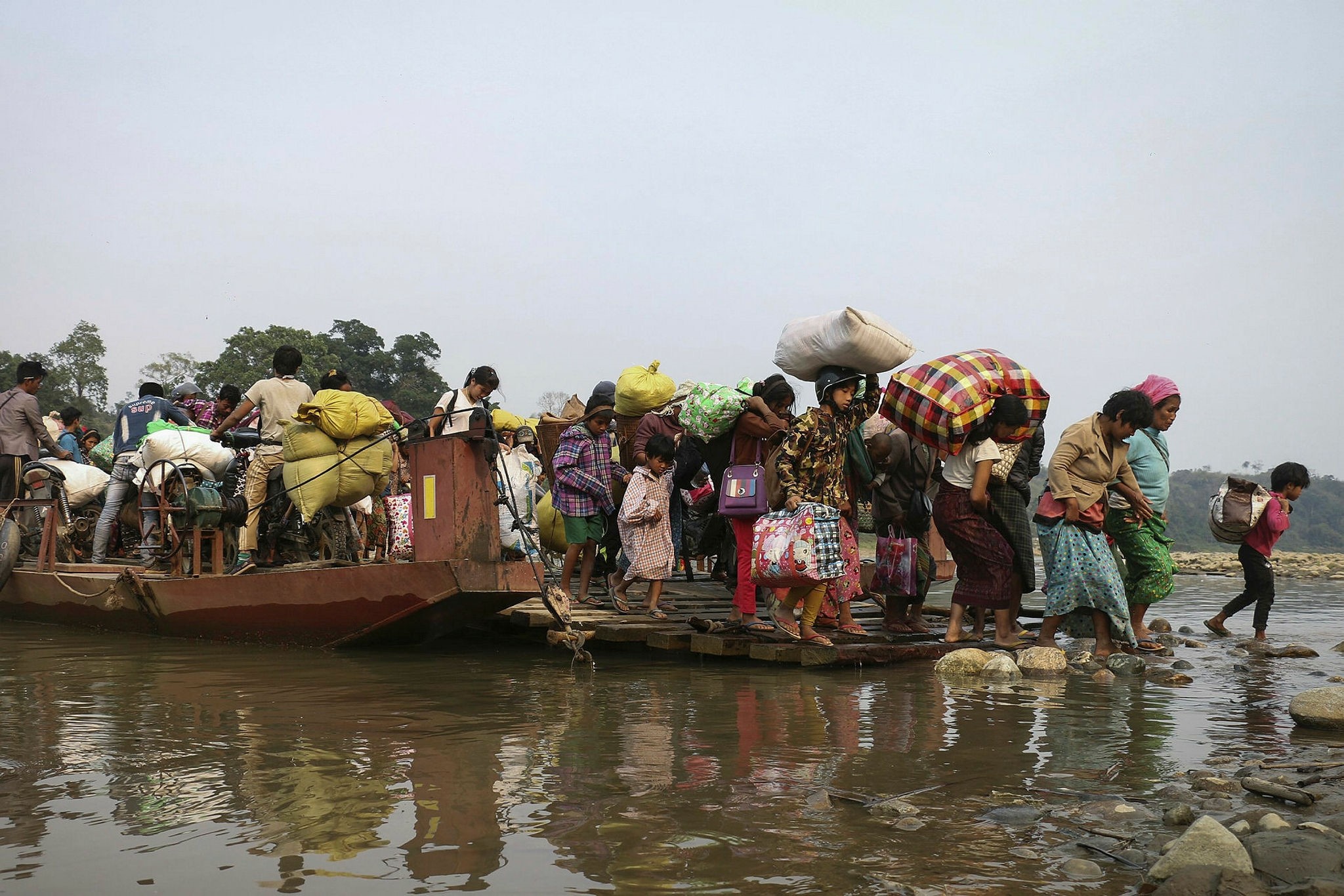 Displaced Kachin residents cross the Malikha river on a ferry to escape Myanmar army atrocities, April 26.
by Compiled from Wire Services May 02, 2018 12:00 am

In addition to the Rohingya crisis, violence against a Christian minority in Kachin state has recently escalated in the mainly Buddhist Myanmar as the U.N. called on the Myanmar army to de-escalate hostilities

"Innocent civilians are being killed and injured, and hundreds of families are now fleeing for their lives," Yanghee Lee, U.N. special rapporteur on human rights in Myanmar, said in a statement, according to Reuters.

The Kachin, who mostly live in the country's northernmost state of the same name, make up some of the more than 6 percent of Christians in Myanmar, the second largest religious group after Buddhists, according to latest figures.

Thousands of ethnic Kachin people on Monday staged a protest against the fresh military offensives as fighting escalates in several areas of Myanmar's northern Kachin state.

Ethnic community leaders and civil society groups organized a protest in Myitkyina on Monday, demanding that the government rescue those who are caught in the clashes.

"About a thousand people are trapped in armed clashes in nine out of the 18 townships of the Kachin state. The government must rescue them immediately," said Gum San Nsang, the leader of the Kachin Alliance advocacy group based in Myitkyina.

"The government has failed to do so. The government instead blocked us from rescuing those people," he told Anadolu Agency (AA) by phone after the protest.

Gum San Nsang accused the military of committing rights violations against ethnic Kachin villagers and using them as human shields during the renewed fighting. More than 4,000 people have been displaced in the country's northernmost state of Kachin near the border with China in the last three weeks, Mark Cutts, head of the UN's Office for the Coordination of Humanitarian Affairs (OCHA), told Agence France-Presse (AFP) last Friday.

The numbers do not include some 15,000 people who have fled since the beginning of the year, and upwards of 90,000 residing in IDP camps in both Kachin and Shan states since a ceasefire between the government and the powerful Kachin Independence Army broke down in 2011.

"We have received reports from local organizations saying that there are still many civilians who remain trapped in conflict-affected areas," Cutts said of the recent clashes, as reported by AFP.

"Our biggest concern is for the safety of civilians, including pregnant women, the elderly, small children and people with disabilities. We must ensure that these people are protected." OCHA has been unable to verify reports that civilians have been killed in the fighting.

Myanmar's border areas have been unstable since its independence from British colonial rule in 1948, hosting a dizzying array of insurgencies, local militias, and drug-running operations.

In addition to the Rohingya crisis, the fighting has put a spotlight on Myanmar leader Aung San Suu Kyi's stuttering efforts to bring peace to the diverse, Buddhist-majority country.

Ethnic armed groups are demanding more autonomy and control from a country in which the Burmese hold major positions of power in politics and the armed forces. Rights groups say the army has stepped up its campaign in remote areas of Myanmar amid the Rohingya crisis, which has seen some 700,000 people flee to Bangladesh. The United States and the U.N. have called the military crackdown ethnic cleansing, while Myanmar denies the claims and says it was defending itself against Rohingya insurgents.