A guide to Wednesday's general election in Malaysia 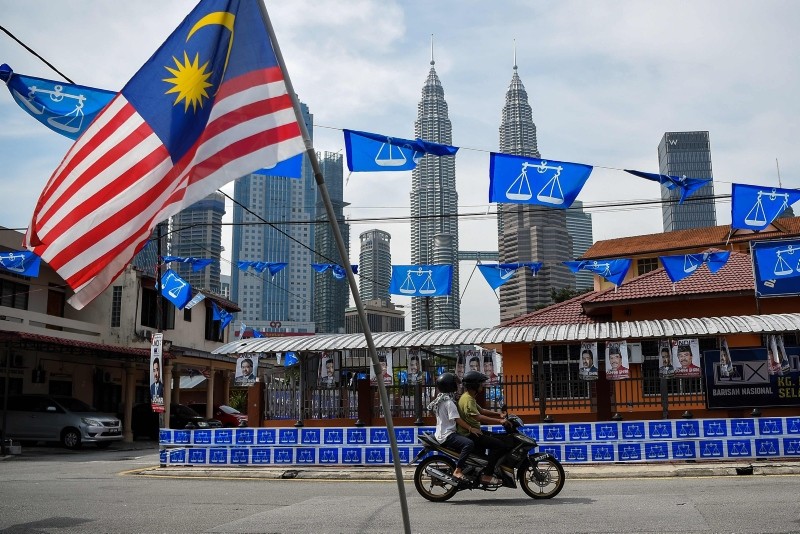 Malaysia's Petronas Twin Towers loom in the background as a motorist rides past the ruling coalition party Barisan Nasional's flags on the eve of the 14th general election in Kuala Lumpur on May 8, 2018. (AFP PHOTO)
by Associated Press
May 08, 2018 12:00 am

A guide to Malaysia's general election on Wednesday that will determine if the ruling coalition, which is facing a strong opposition challenge, can extend its 60-year hold on power.

The contest pits the National Front coalition against the opposition Alliance of Hope. The National Front has ruled Malaysia since independence from Britain in 1957 and is the world's longest-serving elected government. The coalition consists of 13 communal parties, led by Prime Minister Najib Razak's United Malays National Organization, and its manifesto pledged to "make Malaysia greater." Support for the coalition has eroded in the last two elections. It holds 132 out of 222 parliamentary seats, helped by gerrymandering and support from two stronghold states on Borneo island.

The Alliance of Hope succeeded the People's Alliance that disintegrated in 2015 after its main Islamist ally left. Charismatic opposition leader Anwar Ibrahim was imprisoned the same year for sodomy in a case he said was politically motivated. It has four parties, holding 72 parliamentary seats. Its candidate for prime minister is 92-year-old former Prime Minister Mahathir Mohamad. In a show of unity, all of its candidates will contest under Anwar's party banner. It pledges to rescue Malaysia from kleptocrats and "rebuild the country." The Pan-Malaysian Islamic Party, which left the opposition pact, holds 14 parliamentary seats and is unlikely to gain much support on its own.

The campaign has been personality driven, setting Najib against his former mentor Mahathir. Najib, 64, is seeking a third term and is under pressure to improve his coalition's performance. If he fails, he could face challenges from within UMNO in year-end party elections. Najib became Malaysia's sixth prime minister in 2009 but his rule has been clouded by a corruption and international money laundering investigation by the U.S. and several other countries into Malaysian state investment fund 1MDB. U.S. investigators say $4.5 billion was looted from the fund by associates of Najib. U.S. Attorney General Jeff Sessions called it "kleptocracy at its worst."

The 1MDB fiasco prompted Mahathir, leader for 22 years until his retirement in 2003, to make a political comeback. Credited with transforming the Southeast Asian backwater into a modern economy, Mahathir's authoritarian rule was also stifling. His return to politics galvanized a fractured opposition and boosted its chances of winning support from rural Malays, a key voting bloc. At 92, he would be the world's oldest leader if the opposition wins but possibly not for long. He has agreed to hand the baton to Anwar, who will be freed from prison on June 8 and can take power with a royal pardon.

Malaysia has a first-past-the-post system under which the candidate with the most votes, but not necessarily a majority, wins. The National Front won 47 percent of the popular vote in 2013 but 60 percent of parliamentary seats. New electoral boundaries approved by parliament last month further skewed constituencies in favor of the National Front. Indelible ink, which was introduced in 2013 polls, will be used to prevent multiple voting but there have been complaints it can be easily washed off.

Nearly 15 million Malaysians are eligible to vote, including some 300,000 police and armed forces personnel who voted on May 5. Some 9,000 polling stations, mainly schools and community centers, will be open from 8 a.m. (0000 GMT) to 5 p.m. (0900 GMT). The Election Commission expects an 85 percent voter turnout despite the unusual midweek poll, which has been declared a public holiday.

Up for grabs are 222 seats in the federal parliament and 505 seats in 12 of 13 state assemblies. One state held its election earlier, won by the National Front which controls 10 states. The opposition has ruled two of Malaysia's wealthiest states, Selangor and Penang, since 2008. One other state is held by the Pan-Malaysian Islamic Party. Vote counting, including for the early ballot, will start once polling stations close. Results are expected to trickle in from 9 p.m. (1300 GMT), with the victor to be announced on the night.

Despite a robust economy, a rising cost of living has angered many Malaysians. Najib abolished fuel subsidies and introduced an unpopular 6 percent goods and services tax in 2015. Stagnant wages, youth unemployment and expensive housing are also concerns.

Preserving Malay privileges enshrined in a decades-old affirmative action program that favors them in jobs, education and contracts is the top priority for many ethnic Malays, who account for two-thirds of the population. Najib's UMNO projects itself as the defender of Malay rights but Mahathir has helped the opposition chip away that image.

Corruption scandals have dogged the National Front. The 1MDB saga has angered mainly urban voters, triggering large anti-government rallies in Kuala Lumpur in 2015 and 2016 that led Najib to clampdown on dissent. A graft scandal at state plantation agency FELDA has raised rumblings among rural Malays against the government.