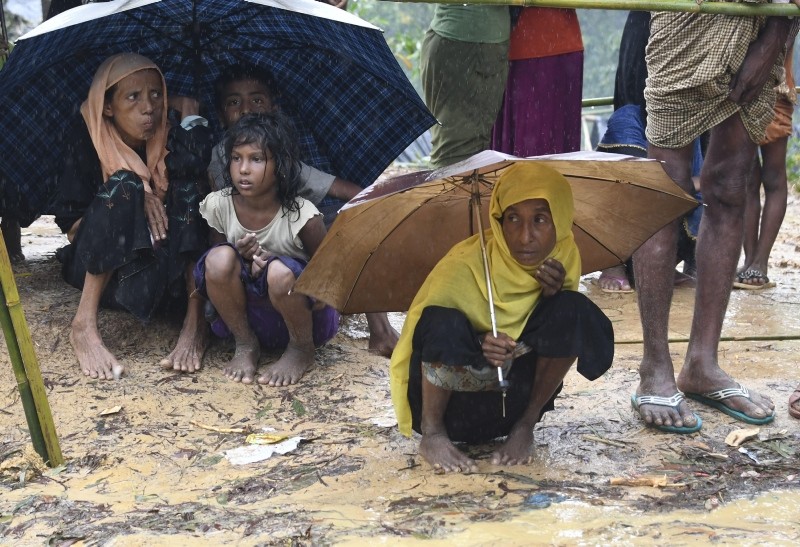 In this file photo taken on September 17, 2017 Rohingya refugees protect themselves from rain in Balukhali refugee camp near the Bangladesh town of Gumdhum (AFP File Photo)
by Anadolu Agency May 08, 2018 12:00 am

The world is failing to take real steps to fight the genocide of Rohingya Muslims in Myanmar, said the head of the British-based Myanmar Human Rights Network on Monday.

"The international community is not taking concrete actions against the Myanmar government and its army that persecutes Rakhine Muslims, and this is encouraging them to create more problems and attack people," Kyaw Win told Anadolu Agency in a telephone interview conducted while he was in Istanbul, attending a conference.

He also charged that the U.N. is not willing to take measures against a "visible genocide," mentioning how U.N. Security Council delegations have visited Rakhine state, the site of much of the persecution.

"The UNSC is divided on deciding against Myanmar government to bring them to the International Criminal Court," he said.

Win added that while the persecution of Rohingya Muslims began at the hands of Myanmar's Buddhists, now people of other faiths are also involved.

He also thanked the Turkish people and government for standing beside the Rohingya in this "dreadful time."

On the Rohingya refugees in Bangladesh, he warned that the monsoon season will threaten the health and safety of some 200,000 refugees.

Turkey has been at the forefront of providing aid to Rohingya refugees, and President Recep Tayyip Erdogan has raised the issue at the U.N.

Since Aug. 25, 2017, some 750,000 Rohingya, mostly children and women, fled Myanmar when Myanmar forces launched a crackdown on the minority Muslim community, according to the Amnesty International.

In a report published on Dec. 12, the global humanitarian organization said the deaths of 71.7 percent or 6,700 Rohingya were caused by violence. They include 730 children below the age of 5.