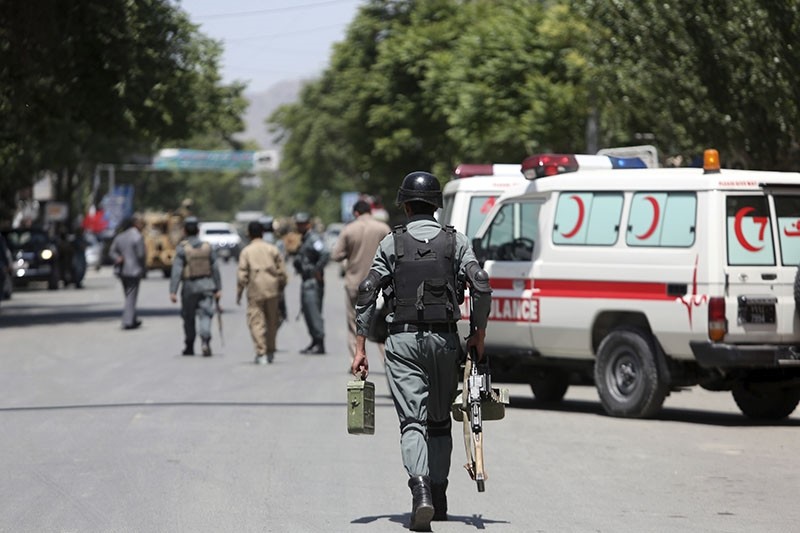 Afghan security personnel inspect at the site of a suicide attack, in the center of Kabul, Afghanistan, Wednesday, May 9, 2018. (AP Photo)
by Compiled from Wire Services
May 09, 2018 12:00 am

At least two people were killed and six people were injured in four back-to-back suicide bombings in Kabul on Wednesday, officials said, as clashes with militants continued in the two areas hit by the blasts.

Interior Ministry spokesman Najib Danish said the first suicide bomber attacked a station in the western part of Kabul, killing at least two police. He said there was sporadic gunfire after the blast, as a "cleanup operation" was carried out. Kabul police chief Gen. Daud Amin said another two policemen were wounded in the attack.

Amin said a separate attack in central Kabul, in which a suicide bomber struck at the entrance to a police station, set off fighting that was still underway. He said gunmen occupied a nearby building, from which they were firing at security forces.

Asam, the head of the Kabul ambulance service, who only has one name, said six people have been transferred to hospitals. The toll was expected to rise.

Daesh claimed responsibility for one of the attacks on a police compound in Kabul, the group's Amaq news agency reported. It said the attack occurred in Kabul's Dasht-e-Barchi district but gave no details on any casualties.

Twin suicide bombings claimed by Daesh last week killed at least 25 people, including nine journalists who had rushed to the scene of the first attack. It was the deadliest assault on reporters since the fall of the Taliban in 2001.

Elsewhere in Afghanistan, the Taliban advanced on a district compound, officials said Wednesday, with one reporting the capture of the northern district by the insurgents and another saying heavy fighting was still underway.

The battle for the compound in the Bilchirgh district, in the northern Faryab province, came a day after the insurgents captured the district compound in the remote Tala wa Barfak district, in the northern Baghlan province. The Taliban have captured several districts in different parts of the country from Afghan security forces since 2014, when the U.S. and NATO formally concluded their combat mission and shifted to a supporting role.

The Taliban issued a statement saying they control the district and claiming to have killed 10 security forces.

Elsewhere in Afghanistan, the Taliban attacked a school being used as a voter registration center, killing eight soldiers in the latest in a series of attacks targeting preparations for elections later this year.

Abdul Aziz Beg, head of the governing council in the western Badghis province, said two other soldiers were wounded and one is missing.

"There are many areas in the province under a high security threat, and this site was one of those areas," he said, adding that the center was some 30 kilometers (20 miles) west of the provincial capital of Qala-e Now.

In the eastern Nangarhar province, a rocket fired by insurgents struck a market, killing two people and wounding 19, according to Attahullah Khogyani, spokesman for the provincial governor. He said another four other civilians were killed and 15 wounded in a gun battle in the same district, in which two insurgents were killed and seven wounded. It was unclear who was behind the attacks, but the Taliban and an Islamic State affiliate are both active in the province.