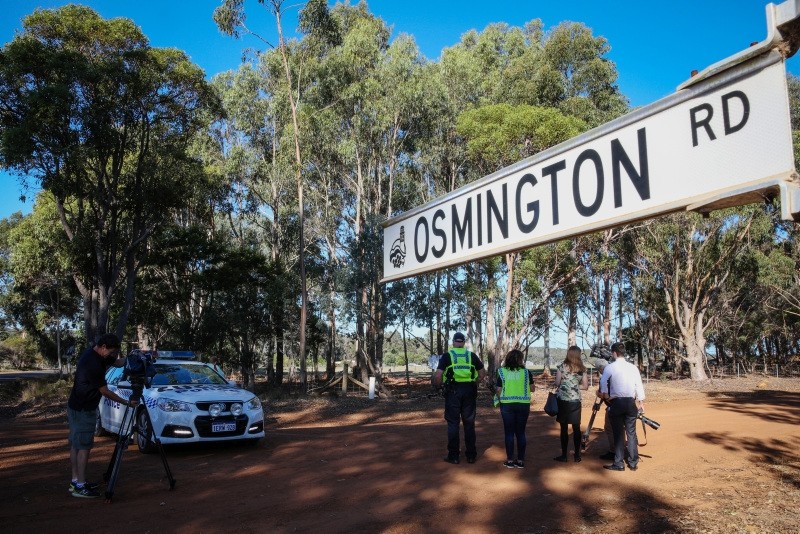 Media film a property from a police roadblock where police are investigating the deaths of seven people in suspected murder-suicide in Osmington, east of Margaret River, 260 kilometers southwest of Perth, Australia, May 11, 2018. (EPA Photo)
by Compiled from Wire Services May 11, 2018 12:00 am

Seven people including four children were found dead with gunshot wounds Friday at a rural property in southwest Australia in what could be the country's worst mass shooting in 22 years, police said.

Police would not comment on the possibility of murder-suicide, but they are not looking for a suspect.

After being alerted by a phone call before dawn, police found the bodies and two guns at the property in Osmington, a village of fewer than 700 people near the tourist town of Margaret River, Western Australia state Police Commissioner Chris Dawson said. Police won't say who made the call.

The bodies of two adults were found outside a building and the rest were found inside. They all resided at the property, he said.

According to local media, three generations of the same farming family were involved in the incident and two of the adults were the grandparents of the family.

Police have no information to raise concerns about wider public safety, suggesting a shooter is not at large.

"Police are currently responding to what I can only describe as a horrific incident," Dawson told reporters.

"This devastating tragedy will no doubt have a lasting impact on the families concerned, the whole community and, in particular, the local communities in our southwest," he added.

Police were attempting to make contact with victims' relatives, Dawson said. He declined to release the names or ages of the dead.

Libby Mettam, a local parliamentarian, said the deaths had sent "significant shockwaves" through the town and the community was hurting.

"This is a much-loved family, a big part of the Margaret River community," Mettam told reporters.

Felicity Haynes, a former local councilor, who lives next to the property where the incident took place, said the family involved had moved in just three years earlier and were "caring neighbors."

"They were a very socially aware family, doing their best to create a safe community, and that is why it is so shocking to think that could be destroyed so quickly," she told broadcaster ABC.

Philip Alpers, a Sydney University gun policy analyst, said the tragedy appeared to be the worst mass shooting in Australia since a lone gunman killed 35 in Tasmania State in 1996, prompting the nation to introduce tough gun controls, including penalties of up to 14 years in jail for unregistered firearms.

Australia's gun laws are widely acclaimed as a success, with supporters including former President Barack Obama saying Australia has not had a single mass shooting since they were implemented.

The generally accepted definition of a mass shooting — four deaths excluding the shooter in a single event — has been met only once in Australia since then. In 2014, a farmer shot his wife and three children before killing himself.

Police have revealed few details about the recent killings, and it is not clear whether there was more than one shooter.

Farmers are allowed to own guns under Australian law because they have a legitimate need to use them to kill feral pests and predators or sick or injured livestock. But automatic and semi-automatic rifles and shotguns are banned from public ownership.

Located 270 kilometers south of Perth, Osmington is a collection of a few streets, farms, horse studs, vacation accommodation and vineyards supplying the premium winemaking district known as Margaret River. The village is inhabited by some 135 people.

"Regional and rural areas are particularly vulnerable to these sorts of tragedies, because of the combination of isolation, sometimes mental or financial hardship and easy access to firearms," Less said in a statement.

"Although the details of this tragedy are yet to come to light, Australia has a tragic history of higher rate of gun deaths in rural areas," she added.