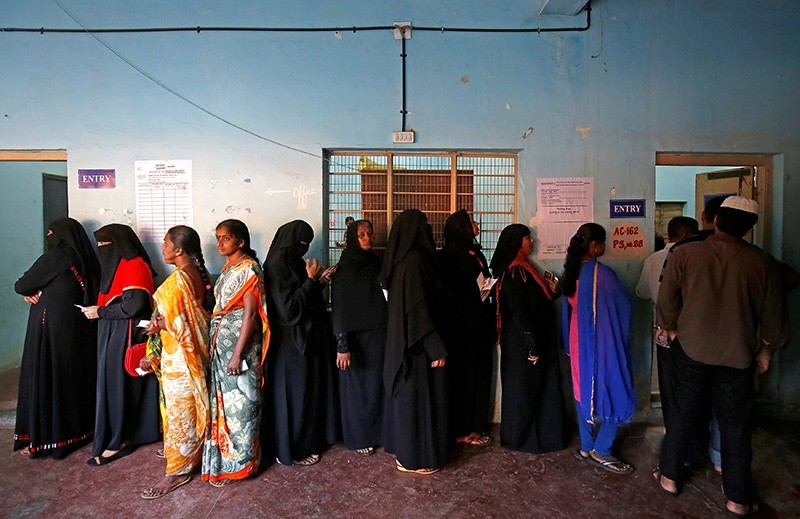 Voters wait in a queue to cast their ballot outside a polling station during Karnataka assembly elections in Bengaluru, India, May 12, 2018. (Reuters Photo)
by Compiled from Wire Services May 12, 2018 12:00 am

Claims of dirty tricks made by India's two main parties cast a cloud over voting that began Saturday in India's southern state of Karnataka, where Prime Minister Narendra Modi is seeking to wrest control over one of the few places left in the hands of the opposition Congress party.

Modi faces a general election within 12 months, and how his Bharatiya Janata Party (BJP) fares in Karnataka, the only southern state where it has ever made significant inroads, could give an indication whether the tide is still with him.

Voting was postponed in one constituency after the discovery of the voting cards, which authorities suspect were obtained through bribes. Police have launched an investigation.

The state election commission said there was a plot to "vitiate the poll process" in Rajarajeshwari Nagar district of the state capital Bangalore.

Congress and Modi's BJP accused each other over the fraud. Voting in the district was pushed back to May 28.

The BJP and its allies are currently in power in 22 of India's 29 states, but after Karnataka, three more state elections will fall due by the end of the year.

Both Modi and Congress leader Rahul Gandhi, the scion of the Nehru-Gandhi dynasty that has dominated Indian politics since independence, have campaigned hard in Karnataka, a state of 66 million people with diverse constituencies.

Tens of thousands of security personnel were deployed across the state of 65 million people for voting. The results, which will have a major impact on campaigning for a national election next year, are to be announced Tuesday.

The two parties urged voters to brave the disruption and turn out in force.

Congress leader Rahul Gandhi appealed to party workers to "provide all possible assistance to those affected by heavy rains.

"Our polling booth teams must remain alert and must help voters facing difficulties in reaching polling booths," he added in a Twitter statement.

Modi also sought to rally supporters as some voters complained of having to wade through muddy pools to get to voting stations.

"Urging my sisters and brothers of Karnataka to vote in large numbers today. I would particularly like to call upon young voters to vote and enrich this festival of democracy with their participation," the prime minister said on Twitter.

Karnataka is the only place in South India where the Hindu nationalist BJP has ever managed to win control of the state government.

State capital Bengaluru is regarded as the home of India's "Silicon Valley," while voters in farming and mining areas have very different priorities from urban dwellers.

Both parties have promised farm loan waivers if they came to power, joining the states of Uttar Pradesh, Maharashtra and Punjab which have announced loan waivers estimated at $15 billion, which would increase the fiscal burden of those states over the medium term.

Opinion polls have forecast neither the BJP or Congress would emerge as a clear winner when Karnataka finalizes the poll results on May 15. Such an outcome could result in Janata Dal (S), a regional group, taking the role of kingmaker in the 224-member state assembly.

Voter surveys in India are often unreliable, however.

Whereas voters elected Modi in 2014 thanks to his promise of reforms that could unlock growth in the economy there has been disquiet over his stance toward India's non-Hindu minorities, and the pain resulting from some of the economic steps taken.

"The markets will view the results as a testament of the government's popularity in midst of wider GST-led disruptions and asset market volatility," Radhika Rao, an economist of DBS Bank said in a note earlier this week.