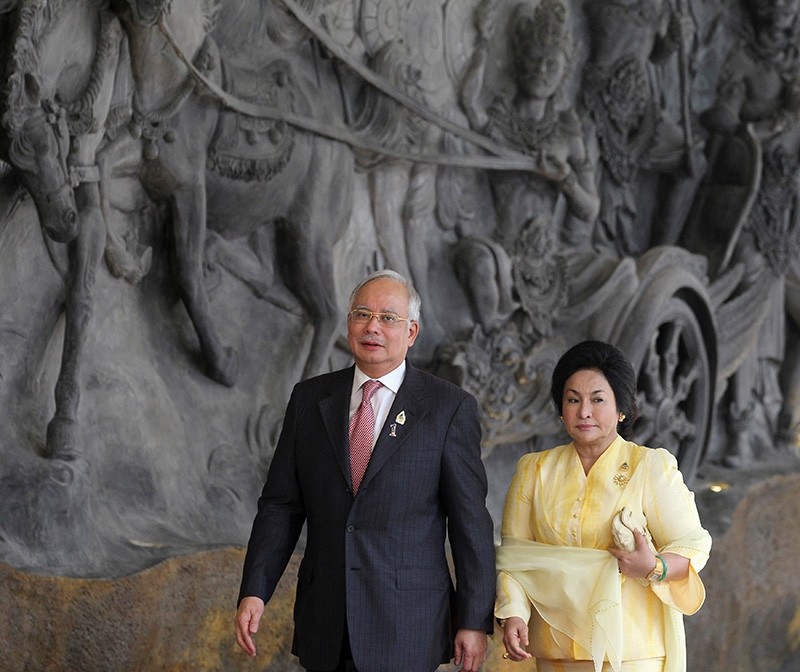 Malaysia's former Prime Minister Najib Razak and his wife Rosmah Mansor arrive at the Bali Nusa Dua Convention Center before the opening ceremony of the Association of South East Asian Nations Summit in Nusa Dua, Bali Nov. 17, 2011. (Reuters Photo)
by Daily Sabah with Agencies May 12, 2018 12:00 am

Malaysia's Immigration Department said Saturday that former scandal-ridden Prime Minister Najib Razak and his wife are barred from leaving the country, shortly after he announced plans for a short holiday.

The newly-elected Prime Minister Mahathir Mohamad said he prevented Najib from leaving the country to avoid the problem of extradition.

A leaked flight manifesto shows Najib and his wife Rosmah Mansor were due to leave on a private jet on Saturday to Jakarta, fueling rumors he was fleeing the country to escape possible prosecution over a massive corruption scandal involving the 1MDB state fund.

Later Saturday, Najib told a news conference that he was stepping down with immediate effect as president of the United Malays National Organization as well as chairman of the National Front coalition. He said his deputy Ahmad Zahid Hamidi will take over as president of UMNO, a party that dominates the coalition.

The announcement followed strong calls from the party for the 64-year-old to step down.

"We accept the people's verdict with an open heart. Maybe this will be an opportunity for us to fix our weaknesses and shortcomings, although these are more a matter of perceptions than reality," he said. "God willing, UMNO will continue to live."

In his earlier statement on social media, Najib said he was committed to "facilitating a smooth transfer of power."

The Immigration Department, which had initially said there was no travel blacklist for Najib, issued a brief statement that Najib and Rosmah "have just been blacklisted from leaving the country."

Najib responded swiftly by saying he respected the department's ruling and will stay with his family in the country.

His holiday plans come as strong calls emerged from his ruling Malay party, which dominates the National Front coalition, for Najib to step down over the election results.

The National Front, which has ruled Malaysia since independent from Britain, obtained only 79 of the 222 parliamentary seats, losing power to Mahathir's four-party alliance amid public anger over the 1MDB scandal and rising cost of living.

It was a remarkable comeback for Mahathir, who was premier for 22 years until his retirement in 2003.

Mahathir, who is now the world's oldest elected leader at 92, has said his government will not go on a witch-hunt over the 1MDB fiasco but that Najib will have to face the court if he's found to be responsible.

The fund was started by Najib when he took power in 2009, but it accumulated billions in debts and is being investigated in the U.S. and several other countries. U.S. investigators said Najib's associates stole and looted $4.5 billion from the fund, of which some $700 million landed in Najib's bank account and some $30 million used to buy jewelry for his wife.

Najib denies any wrongdoing. He sacked critics in his government including an attorney general and a deputy prime minister and muzzled the media. The new Attorney-General Mohamed Apandi Ali cleared Najib in 2016, saying the money was a donation from the Saudi royal family and that most of it was returned.

Mahathir has indicated that Mohamed Apandi would be axed for hiding evidence of wrongdoing.

Former central bank governor Zeti Akhtar Aziz and billionaire tycoon Robert Kuok were among those named to a special team of eminent persons that will advise the government on economic and financial matters for the next 100 days.

Mahathir also said Saturday that the future of jailed opposition leader Anwar Ibrahim, whose support in the opposition coalition helped oust Najib, would be determined by the party.

Anwar's daughter Nurul Izzah Anwar said Saturday her father would be released from prison on Tuesday.

Mahathir said Friday he would begin the process of obtaining an immediate pardon for Anwar, who was imprisoned twice on charges widely believed to be fabricated by the National Front to crush the opposition.

Anwar was due out in June. A royal pardon would allow him to run for political office again and potentially become prime minister.