18 killed after highway overpass collapses over crowd in India 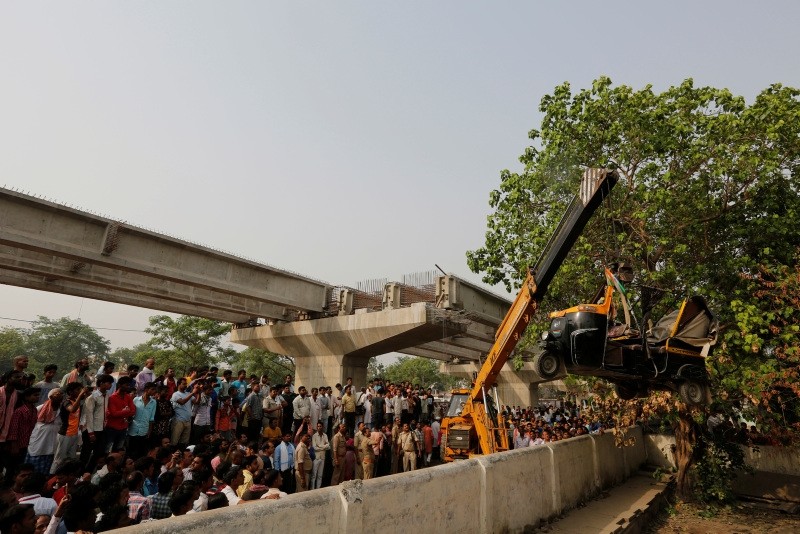 A crane is used to lift an auto rickshaw that got crushed after a highway overpass being built collapsed in Varanasi, India, Wednesday, May 16, 2018 (AP Photo)
by Associated Press May 16, 2018 12:00 am

A highway overpass being built in north India collapsed, killing 18 people when an immense concrete slab slammed down onto the crowded road below, officials said Wednesday.

Local media reports said four officials from the Uttar Pradesh state construction agency were suspended in the wake of the Tuesday collapse.

Rescuers and crane operators worked through much of the night in the city of Varanasi to search for survivors and clear the wreckage, which had crushed cars, motorcycles and a bus. But fears that many more people were trapped were unfounded and the road was reopened Wednesday morning.

"There was sudden rumble and within seconds we saw" the vehicles crushed, resident Ramesh Kumar Singh said in a telephone interview. "It took at least a minute for the people around to realize what exactly had happened."

Most of those killed were in vehicles traveling beneath the overpass, said senior police officer P.V. Ramasastry.

The state's top official ordered a probe into the collapse. He also announced a 500,000 rupee ($7,200) payment to families of those who died.

India has a long history of construction accidents caused by poor materials and inadequately trained workers. In 2016, a long stretch of elevated road being built through the city of Calcutta collapsed, killing 26 people and leaving 11 severely injured.

Prime Minister Narendra, whose political home is in Varanasi, said in a tweet that he was "extremely saddened" by the accident. "I pray that the injured recover soon."

Varanasi, an ancient temple city on the banks of the Ganges River, is a center of pilgrimage for Hindus.