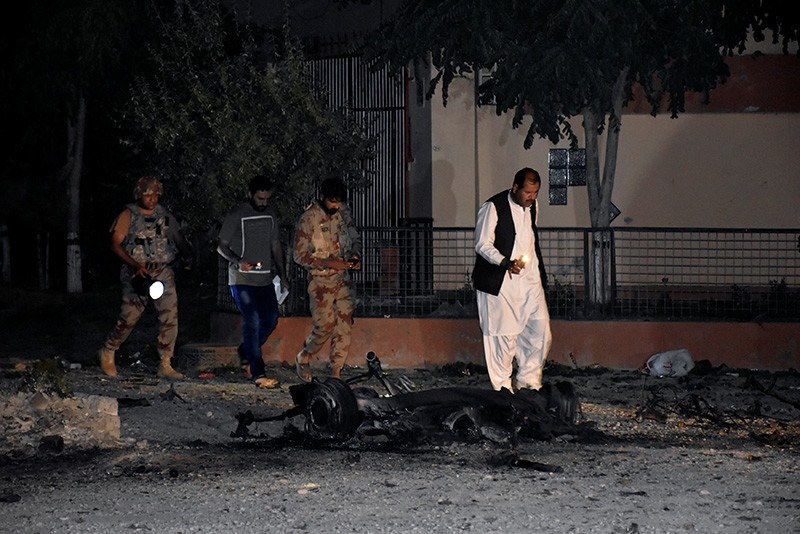 Security officers and paramilitary soldiers survey the site, after five suicide bombers tried to drive a vehicle laden with ammunition and explosives into a military facility in Quetta, Pakistan May 17, 2018. (Reuters Photo)
by Daily Sabah with Agencies May 17, 2018 12:00 am

The target of the attack was a local office of the paramilitary Frontier Corps (FC).

"An explosive-laden vehicle carrying five suicide bombers tried to enter the FC help center. Vigilant FC soldiers fired at [the] terrorists and killed them," the military said in a statement.

Four soldiers were injured in the firefight with the attackers, it added.

The failed attack came just hours after a suicide bomber struck an FC convoy in the northwestern city of Nowshera, wounding 10 people.

The two attacks on the FC came a day after Pakistani forces killed Salman Badeni -- a notorious militant leader wanted for more than 100 murders -- on the outskirts of Quetta, capital of the restive Balochistan province.

No militant group immediately claimed responsibility for the attacks on Thursday, but the military said the attempted storming of the FC office in Quetta was a "response" to the killing of Badeni on Wednesday.

Badeni was the provincial commander of the hardline militant group Lashkar-e-Jhangvi (LeJ), widely considered one of the most violent outfits in Pakistan.

LeJ is blamed for hundreds of deaths in numerous attacks across Pakistan, especially in Balochistan.

Balochistan province has been beset by violence for over six decades, with Baloch separatists claiming it was forcibly incorporated into Pakistan upon the end of the British rule in 1947.

The mineral-rich province, especially its capital Quetta, has also been reeling from sectarian violence for last two decades, which has claimed over 2000 lives, mostly Shia minority.

A number of terrorist groups are active in the province, including the Taliban and local Daesh affiliates.