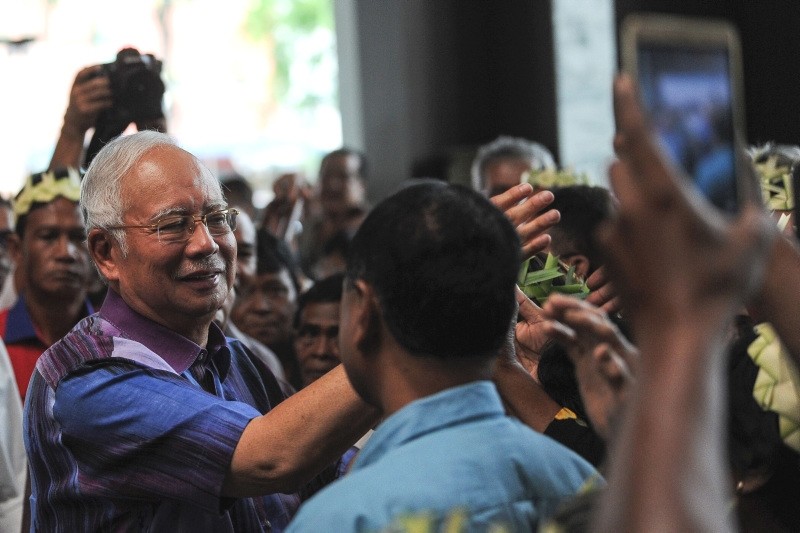 Najib's long-ruling coalition suffered a shocking defeat in May 9 elections amid anger over at least $4.5 billion that investigators say was looted and laundered by Najib's associates from a state investment fund he set up. The new government has reopened an investigation into the case, with police raiding Najib's properties and seizing more than 300 expensive handbags as well as suitcases filled with cash, jewelry and other valuables.

Najib and his wife have been barred from leaving the country.

"Najib has lodged a police report asking for protection for himself and his family as they fear for their safety after the 14th general election," a Najib spokesman told Bernama news agency. He didn't give details.

The Malay Mail newspaper said Najib sought protection due to "clear threats" made, but gave no details.

Malaysian politician Anwar Ibrahim, released this week after years in jail on politically-motivated charges, insisted Sunday that investigations into Najib over the money-laundering scandal follow the rule of the law.

Speaking to reporters after a meeting with former Indonesian president Baharuddin Jusuf Habibie in Jakarta on Sunday afternoon, Anwar said he had urged new Prime Minister Mahathir Mohamad to ensure the investigation into Najib should not repeat what happened to him.

Anwar was imprisoned in the 1990s after serving as deputy prime minister under Mahathir, and again in 2015. He was released from the hospital in Kuala Lumpur on Wednesday after being granted a royal pardon.

"Do not prosecute before we have a thorough investigation," Anwar said. "Do not repeat what they did to me. Just do it in according to the law."

Anwar also urged Najib to find a good lawyer to defend himself.

Police have been stationed outside Najib's house in Kuala Lumpur since he failed to win a third term in office.

On Sunday, he was escorted by police as he traveled back to his hometown of Pekan in central Pahang state.

Najib, 64, has been summoned by the Malaysian Anti-Corruption Commission for questioning on Tuesday. A government official said he could possibly be detained after that.

Abdul Kadir Jasin, a spokesman for a new government advisory council, said an investigation had already been conducted in the past but was suppressed by Najib while he was in power.

"The chances are that he will give his statement and then be arrested," Abdul Kadir wrote on his blog.

At a party event Sunday in Pekan, Najib reiterated that he "didn't steal money from the people" and that the loss of his coalition — which had led Malaysia since independence from Britain in 1957 — was due to a vicious personal attack against him based on slander and lies.

"The people of Pekan know me. I am not a thief. I am not a rogue," he said. "To topple the party, they had to target the president. They would do anything as long as my brand was destroyed."

He said he handed over power to the new government without fuss but lamented that he wasn't treated well. He slammed raids on apartments occupied by his children, accusing police of taking baby shoes and wedding gifts that were unrelated to the 1MDB case.