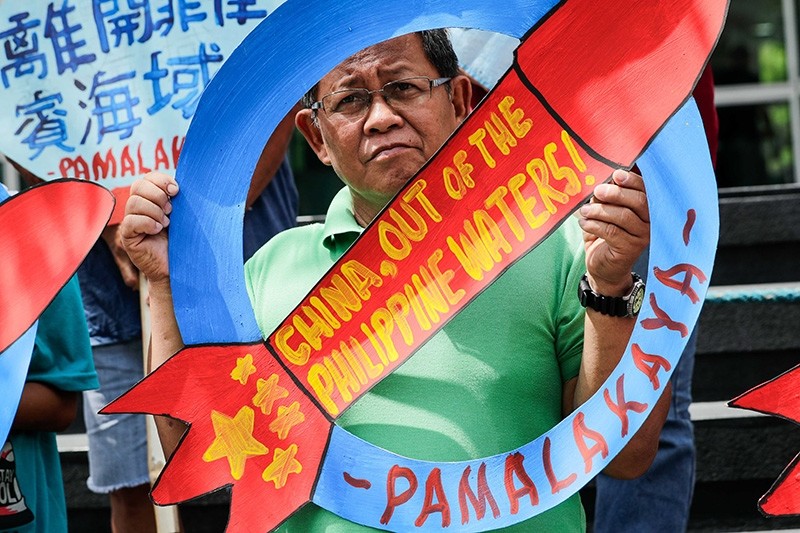 The Philippine government is taking "appropriate diplomatic action" to protect its claims in the South China Sea but did not elaborate or name China in a non-confrontational policy that immediately sparked criticism.

China landed long-range bombers on one of its occupied islands in the disputed sea for the first time last week, underscoring its ability to strike across Southeast Asia and beyond and setting off international concern. A Pentagon spokesman said late last week China's "militarization" of disputed areas destabilizes the region.

The Philippine Department of Foreign Affairs reiterated Monday that the government is committed to protecting "every single inch" of its territory and areas where it has sovereign rights. But it added that its responses to certain developments might not be publicized.

"While appropriate language, whether expressions of condemnation or concern, over certain developments are clearly conveyed through diplomatic channels, it is not our policy to publicize every action taken by the Philippine government whenever there are reported developments taking place," the department said.

"Moving forward, we are taking a different approach to avoid any drawbacks and challenges," the statement added.

Asked to react about China's deployment of the long-range bombers, presidential spokesman Harry Roque later told a news conference, "We express our serious concerns anew on its impact on constructive efforts to maintain peace and stability in the region."

Former Philippine Foreign Secretary Albert del Rosario, who spearheaded a legal challenge to China's vast territorial claims in an international arbitration case that the Philippines largely won in 2016, urged Filipinos to ask President Rodrigo Duterte "to be more proactive and assertive in defending what is ours." A survey, he said, has shown that most Filipinos want the Philippines to assert its sovereign rights upheld by the 2016 arbitration ruling.

"Why are we so timid in the face of China's missile and bomber diplomacy?" asked former national security adviser Roilo Golez. "The world is watching and our response, hat in hand, is a vague 'diplomatic action.'"

After becoming president nearly two years ago, Duterte took steps to thaw the Philippines' frosty ties with China over the sea disputes in an effort to secure Chinese infrastructure funds and investment while often criticizing security policies of the United States, his country's treaty ally.

Duterte refused to immediately demand Chinese compliance to a landmark 2016 arbitration ruling that invalidated China's claims to virtually all of the South China Sea on historical grounds and upheld the Philippines' sovereign rights to vast stretches of waters. He has repeatedly declared that he will not engage China in an armed confrontation.

"We are opposed to war, as we should be," del Rosario said.

"But if threatened by the use of force, we should be ready to inflict, at the very least, a bloody nose on any attacker who is out to harm us," del Rosario said, adding that the acquisition of India's anti-warship Brahmos cruise missiles, for example, could be a good starting point to bolster the Philippine military's defense capability.

The Duterte administration has also muted criticisms of China's increasingly assertive actions in the disputed territories, including the installation of missile defense systems on seven islands it built on disputed reefs close to other areas occupied by rival claimants, including the Philippines, Vietnam, Taiwan and Malaysia.

The long-range bombers involved in the recently reported exercise would have all of Southeast Asia in range. They reportedly landed on Woody Island, China's largest base in the Paracel Islands, which are also claimed by Vietnam and Taiwan.