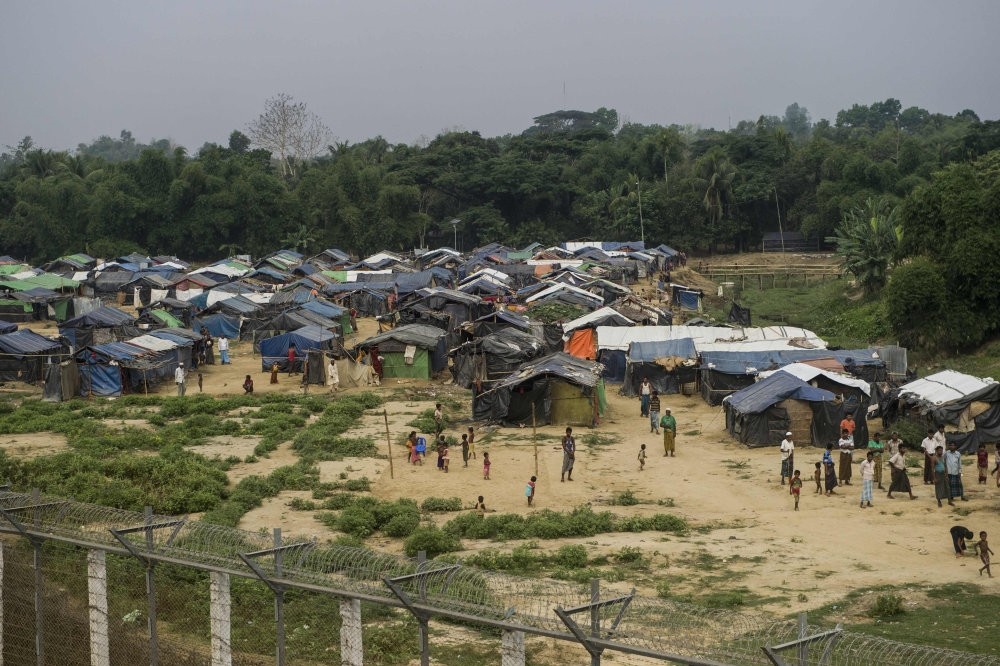 Rohingya refugees gather near their shelters in ,no man's land, behind Myanmar's border lined with barb wire fences, Rakhine state, April 25.
by Compiled from Wire Services May 22, 2018 12:00 am

Myanmar ordered Rohingya refugees to immediately leave no man's land near its border with Bangladesh, exacerbating the humanitarian crisis

Myanmar security forces have resumed loudspeaker broadcasts near its border with Bangladesh ordering Rohingya Muslims to immediately leave a strip of no man's land between the two countries, refugees said Sunday.

Myanmar had agreed in February to stop using loudspeakers to order the stranded Muslims to leave the area immediately and cross into Bangladesh. But, the loudspeaker messages resumed last weekend without warning, Rohingya community leaders said, exacerbating tension along the restive border zone.

"They played it several times yesterday, and have been repeating it this morning. It's very disturbing and creates panic," said Mohammad Arif, one of the leaders camped in no-man's land, as reported by Agence France-Presse (AFP). The messages, broadcast in Burmese and Rohingya, warned the refugees to "leave the area under Myanmar's jurisdiction or face prosecution."

"We are citizens of Myanmar. It's our fatherland. We have every right to remain here. Why should we go elsewhere?," said another community leader, Dil Mohammad.

The broadcasts also refer to the refugees as "Bengalis," the term used by many in Buddhist-majority Myanmar to refer to the Rohingya, whom they consider interlopers from Bangladesh.

The refugee crisis has strained ties between Bangladesh and Myanmar. The neighbors had agreed in November to begin repatriating Rohingya refugees to Myanmar but the process has stalled, with both sides blaming each other for the delays. Those living in no-man's land, and many in the Bangladeshi refugee camps, refuse to return to Myanmar until their safety and citizenship is assured and compensation granted for past injustices.

The U.N. has described the systematic violence by Myanmar against Rohingya Muslims in Rakhine state as possible genocide and ethnic cleansing. Around 6,000 refugees from the persecuted minority have been camping on the narrow stretch of land since fleeing a brutal military crackdown in Myanmar's west last August. An estimated 700,000 Rohingya have fled over the border to Bangladesh since an army crackdown was launched in Rakhine state in August. Myanmar blames Rohingya militants for an Aug. 25 strike on security posts in Rakhine state that triggered a fierce army crackdown. At least 9,000 Rohingya were killed in Rakhine state from Aug. 25 to Sept. 24, according to Doctors without Borders. In a report last December, the global humanitarian group said the deaths of 71.7 percent, or 6,700 Rohingya, were caused by violence. The death toll includes 730 children below the age of 5.