Trump says summit with North Korea's Kim may be delayed 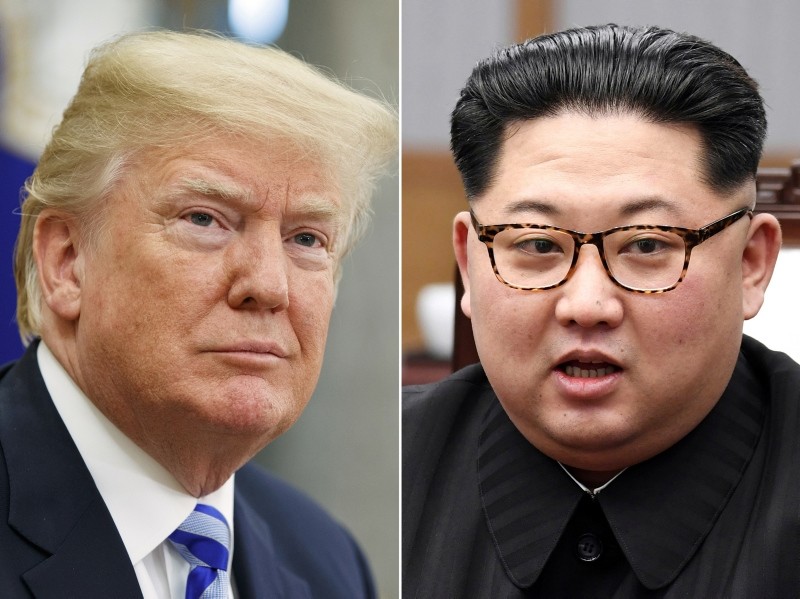 U.S. President Donald Trump warned Tuesday his landmark summit with Kim Jong Un may be delayed, but insisted the North Korean leader is "serious" about denuclearization.

Hosting South Korean President Moon Jae-in at the White House, Trump did little to quell speculation about the wavering prospects of a historic first summit between U.S. and North Korean leaders.

"It may not work out for June 12," Trump said of the Singapore meeting, adding in a now familiar non-committal riff "if it does not happen, maybe it will happen later."

"There are certain conditions we want to happen. I think we'll get those conditions. And if we don't, we won't have the meeting."

Politically, Trump has invested heavily in the success of the meeting, and so privately most U.S. officials, as well as outside observers, believe it will go ahead.

But as the date draws near, Trump's divergence from his top aides, the differences between the two sides and the astronomically high stakes are coming into sharp relief.

Success could lead to peace on the Korean peninsula and end the threat of nuclear war. Failure could all but destroy hopes of a peaceful solution to the crisis.

"You never know about deals," Trump said. "I've made a lot of deals. You never really know."

North Korea's willingness to denuclearize -- the very basis for the talks -- was recently plunged into doubt when the government denounced U.S. demands for "unilateral nuclear abandonment."

Pyongyang also canceled at the last minute a high-level meeting with the South in protest over joint military drills between Seoul and Washington.

Despite that, Trump said he believes the North Korean leader is willing to give up nukes. "I do think he is serious. I think he is absolutely very serious."

He suggested that Kim's apparent about-face may have been at the behest of Chinese leader Xi Jinping.

"And I think things changed after that meeting so I can't say that I am happy about it."

And Trump again raised the prospect of a windfall for Kim if he mothballs weapons programs. "He will be extremely happy" if the deal works out, Trump said. "He will be very happy."

Meanwhile, U.S. Secretary of State Mike Pompeo said later on Tuesday the United States was still planning for a June 12 summit between President Trump and North Korean leader Kim Jong Un but he declined to predict whether the summit would actually take place.

Pompeo told a news briefing the United States would do what it could to ensure the Trump-Kim talks were a success and that he was "confident we'll get there" in the end. He said China had offered "historic assistance" in pressuring Pyongyang.

Moon's trip to the White House represented an effort to salvage the rare diplomatic opening.

The dovish South Korean leader deployed a tactic frequently used by foreign leaders who meet this most mercurial of presidents: flattery.

"Thanks to your vision of achieving peace through strength as well as your strong leadership," Moon said in the Oval office, "we find ourselves standing one step closer to the dream of achieving denuclearization on the Korean peninsula."

"All this was possible because of you, Mr. President," Moon added, taking pains to stress the concrete results of diplomacy so far -- most notably the release of three U.S. prisoners from North Korean jail.

Trump praised his guest, but also indicated that a separate, second round of high-level talks between Moon and Kim may also be on ice. "Right now, he doesn't know whether or not he has a meeting," Trump said of Moon.

South Korea -- deeply worried about Kim's bellicose weapons testing and Trump's similarly bellicose warnings about "fire and fury" -- was instrumental in convincing the two Cold War foes to sit down and talk.

Moon sent his own national security advisor to the White House in March, carrying an offer of talks and word that North Korea may be willing to abandon nuclear weapons, an enticing prospect.

Trump surprised his guests, his own aides and the world by summarily accepting the meeting, seeing an opportunity to "do a deal" and avoid military confrontation.

Analysts saw North Korea's perceived slow peddling as evidence of what they feared all along, that Pyongyang may have been playing for time -- hoping to ease sanctions and "maximum pressure," or of South Korea over torquing the prospects of a deal.

"The current episode of tension reflects a wide and dangerous expectation gap between the United States and North Korea," said Eric Gomez of the CATO Institute.

"Denuclearization is not off the table for the North, but it expects the United States to end the so-called 'hostile policy' as a precondition for denuclearization."

It is far from clear what that means concretely, but it could include the withdrawal of 30,000 U.S. troops from the Korean peninsula.

Trump has been similarly unclear about his own policy.

On Tuesday he indicated the United States may not demand North Korea give up its nuclear program before getting sanctions relief -- a sequencing he said was a fatal flaw of the Iran nuclear deal he scrapped.

"It would certainly be better if it were all in one. Does it have to be? I don't think I'm going to totally commit myself," he said.

Pyongyang is on the verge of marrying nuclear and missile technology allowing it to hit the continental United States with a nuke, a capability Washington has said is wholly unacceptable.