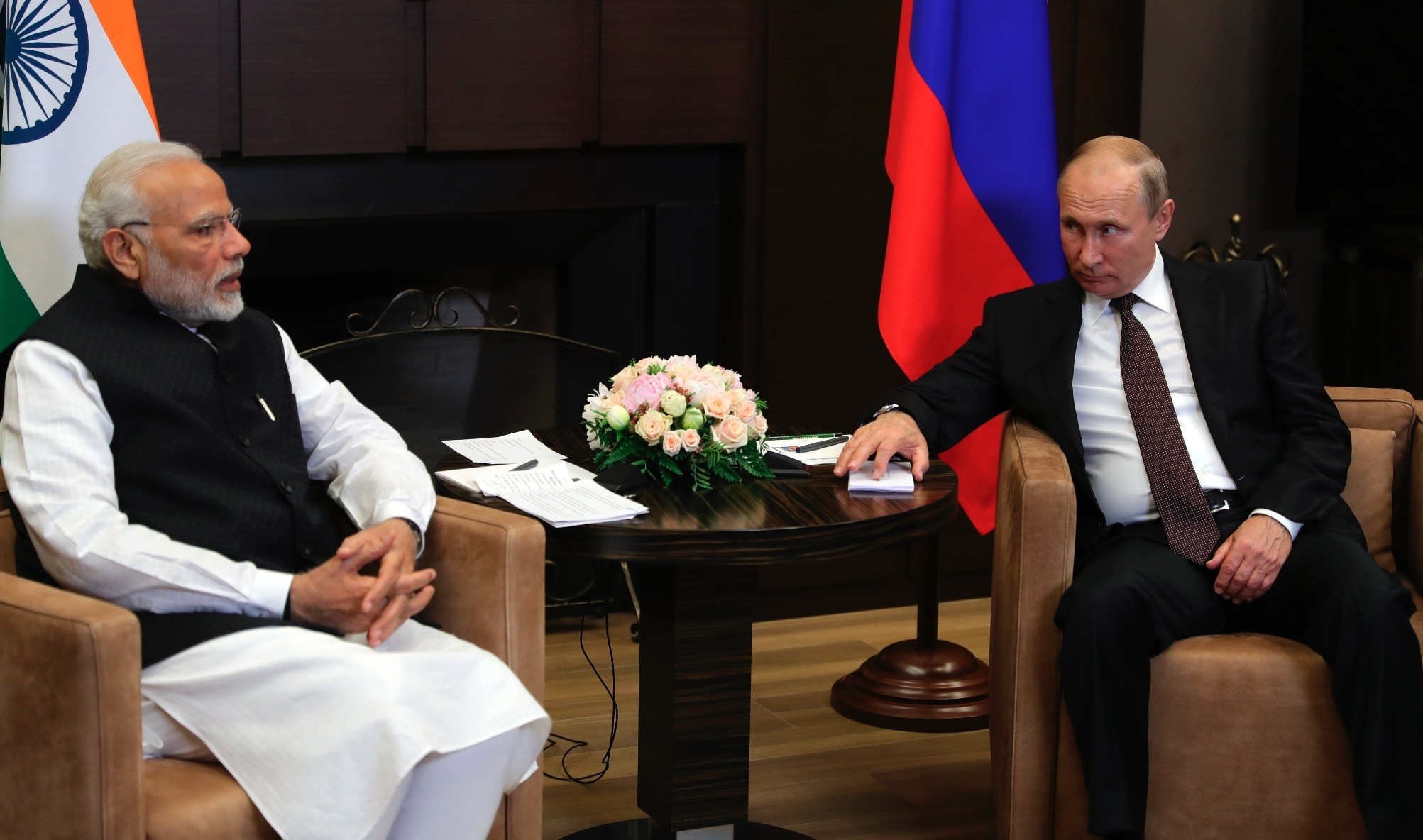 India, in a tight situation amid escalating tensions between Washington and Moscow, seems to have adopted a poised policy while continuing its cooperation with Russia

Indian Prime Minister Narendra Modi visited Russia's Sochi as part of a summit between his country and Russia. India, maneuvering between Russia and the U.S. as well as searching for a solution for China's increasing pressure, seems to have chosen a balanced policy between the super powers amid escalated tensions. Despite having large economic ties and military agreements with the U.S., India has not given up on Russia since the two countries cooperate on nuclear energy and space research.

In the summit where informal talks were held on bilateral relations, there was a warm atmosphere. While Russian President Vladimir Putin called Modi "a big friend of Russia," Modi said he was "confident the talks with President Putin would further strengthen the special and privileged strategic partnership between India and Russia." Official spokesperson of India's Ministry of External Affairs, Raveesh Kumar, posted a bunch of tweets with photos revealing the close ties of the two leaders. For one photo showing Putin and Modi hugging each other, Kumar wrote, "And this is how close friends meet!" It is important to understand India's efforts to stay close to Russia – or rather not staying away from Russia.

Since October 2000, the two countries have made steps toward working closely together. The political initiative, the "Declaration on the India-Russia Strategic Partnership," was aimed at strengthening the two's bilateral ties. Despite this positive stance, India's close relationship with the U.S. has sometimes posed problems. For instance, India has been suffering from the U.S. law, the Countering America's Adversaries through Sanctions Act (CAATSA), which threatens to impose sanctions on certain companies that cooperate with Russia. There are several big Indian companies that could be impinged by that law. Another problematic issue is the defense units of India. According to the data provided by the Stockholm International Peace Research Institute in March, India was Russia's biggest weapons buyer. A March-dated report of the Indian Times revealed the tension over the weapon selling, writing: "India remains the biggest buyer of weaponry from Russia and Israel. The U.S., as part of its foreign policy to counter China's growing influence in Asia, has notched up military sales to India – worth $15 billion over the last decade and up by 557 percent between 2008-2012 and 2013-2017 – to overtake several countries and displace Russia from the top spot for a couple of years." Despite the U.S.' efforts, it came as a surprise and considered a distasteful decision that India was holding talks with Russia for procuring S-400 long-range surface-to-air missile systems.

It is important to note that Russia has adopted a warmer policy toward Pakistan in the recent years, as well. Indian-Pakistani relations have been strained for several reasons, the most apparent being the territorial dispute over Kashmir. Russia and Pakistan held a joint military maneuver in 2016, despite India's reservations. Moreover, Russia has assumed certain economic projects, including the construction of a pipeline between Lahore and Karachi. Indian media outlets have circulated the claim that Russia was using its closeness with Pakistan as leverage against India in order to compel Delhi not to side with the U.S.

The two countries have considerable trade budgets – more than $30 billion. Neither Russia nor India wants to lose the market. While Russia benefits from India's huge population, India enjoys the technology and military equipment offered by Russia.

Both India and Russia have nuclear energy and weapons. China, Pakistan and India are the only three other countries holding nuclear weapons apart from North Korea in the region. Russia has been giving support to India's nuclear program since 2014 after an agreement was inked. Russia started building a nuclear power plant in India. Moreover, the two countries also cooperate in space energy and research, with plans to send a manned space flight.

Despite certain tension and disputes, especially Russia's cooperation with Pakistan, India seems to be continuing its relations with Russia and maintaining a warm partnership.