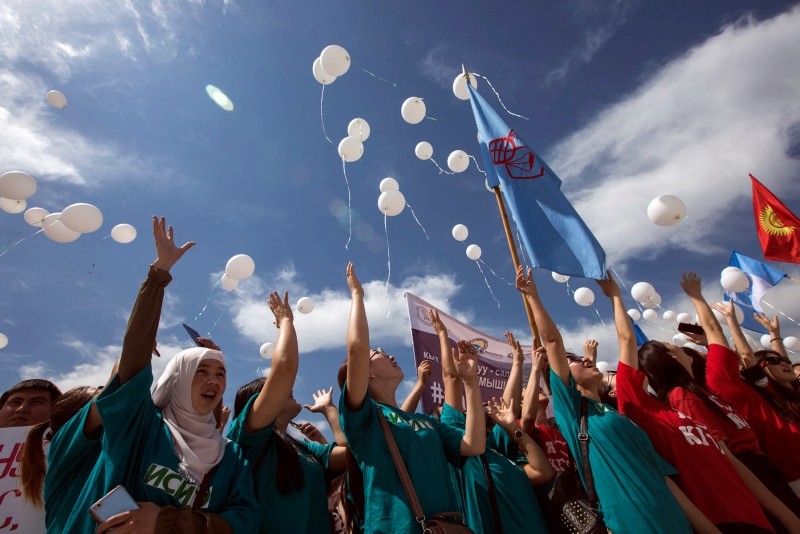 More than a thousand people including schoolchildren protested against bride kidnappings in Kyrgyzstan on Wednesday after a 20-year-old woman was murdered in a police station by her abductor.

Medical student Burulai Turdaaly Kyzy, 20, was stabbed to death in the north of the Central Asian country as she prepared to give evidence against her kidnaper.

The 30-year-old killer then turned the knife on himself and ended up in hospital.

The murder in May drew condemnation from the United Nations, rights groups and Kyrgyz President Sooronbai Jeenbekov.

The U.N. says 13.8 percent of women in the ex-Soviet republic younger than 24 are forced into marriage with their abductors.

Demonstrators in the capital Bishkek's main square held white balloons and posters bearing slogans such as, "We are against bride-stealing" and "Allow girls a chance to be happy."

One student, who gave only her first name, Asel, called the murder "alarming."

"We are all shocked that this happened inside a police station. I am 19 years old and I am also afraid of being stolen," she told French Press Agency (AFP).

Education Minister Gulmira Kudaiberdiyeva told AFP it was time "to radically change attitudes" towards the "shameful phenomenon" of bride kidnapping.

"We need to stop giving away our girls against their will," she said at the demonstration.

"There are already good laws, but we need to work with the parents of young people to change their consciousness."

More than 20 police officers received various punishments for allowing Turdaaly Kyzy to be killed at a police station.

Reports of bride kidnappings have risen recently in part due to new legislation but many parents still refuse to report the crime when their daughters are stolen.

Although bride kidnappings existed in Kyrgyzstan's nomadic past, many argue a surge in the years following the collapse of the Soviet Union in 1991 was more closely linked to the economic depression than any cultural revival.

More than 3,600 girls and women become victims of violence in the country every year. On average, 32 girls are kidnaped per day, six of them raped.

Experts attribute the trend to general discriminatory practices against women, such as bride kidnappings, early and forced marriages and sexual and family violence. The situation is aggravated by social stereotypes, because of which a sense of shame prevents women from reporting crimes against them.

Turdaaly Kyzy's tragic case has trained public attention on law enforcement after police apprehended the pair but allowed her to be kept with her kidnaper unattended inside the police station.

Human Rights Watch condemned police for showing a "horrifying disregard for the danger that (the victim) faced" when they failed to separate her from her killer.

The chief of police in the northern Chui region where the murder took place was sacked while over a dozen police are facing negligence charges in connection with the killing.