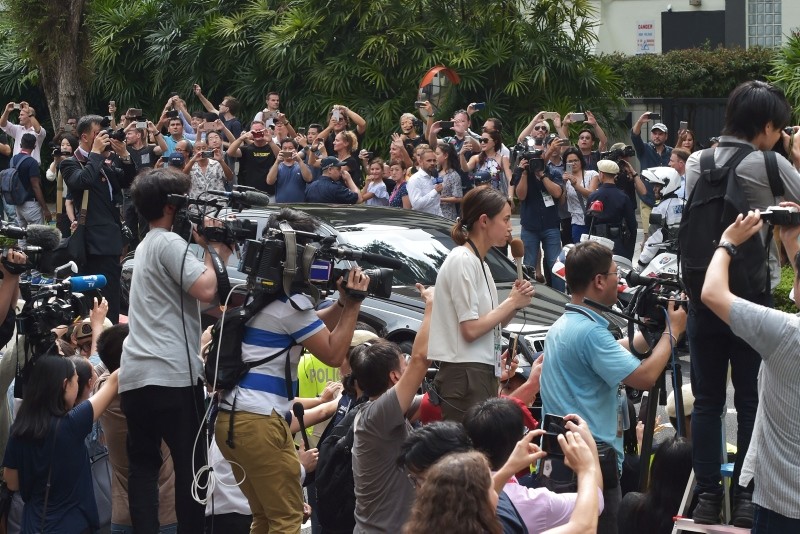 Journalists and onlookers watch the motorcade carrying North Koran leader Kim Jong Un (not pictured) arriving at the St. Regis hotel ahead of the US-North Korea summit in Singapore on June 10, 2018. (AFP Photo)
by Compiled from Wire Services Jun 10, 2018 12:00 am

Singapore officials said two South Korean journalists arrested on suspicion of trespassing at the residence of the North Korean ambassador have been deported.

Singapore's Law and Home Affairs Minister K Shanmugam said Sunday that it was unwise to break into an ambassador's residence in any country in the world, and Singapore was no exception. He added that the case was closed.

The two men represented the Korean Broadcasting System News and were arrested on Friday. They were not accredited as media personnel in Singapore. The national broadcaster, more widely known as KBS, has apologized.

The maximum penalty for criminal trespass is a jail term of three months and a fine of 1,500 Singapore dollars. Another KBS journalist and an interpreter are also under investigation.

Singapore, a small island nation, has been overwhelmed by around 3,000 press members who arrived in the country to cover a historical summit between U.S. President Donald Trump and North Korean leader Kim Jong Un.

Trump was due to arrive several hours later from Quebec, where he attended the G7 summit with other world leaders.

The Trump-Kim summit, which will be held at the Capella Hotel on Tuesday, will mark the first time a North Korean leader has met with a sitting US president. The talks will focus on reaching an agreement on the denuclearization of North Korea in exchange for the easing of economic and diplomatic sanctions.