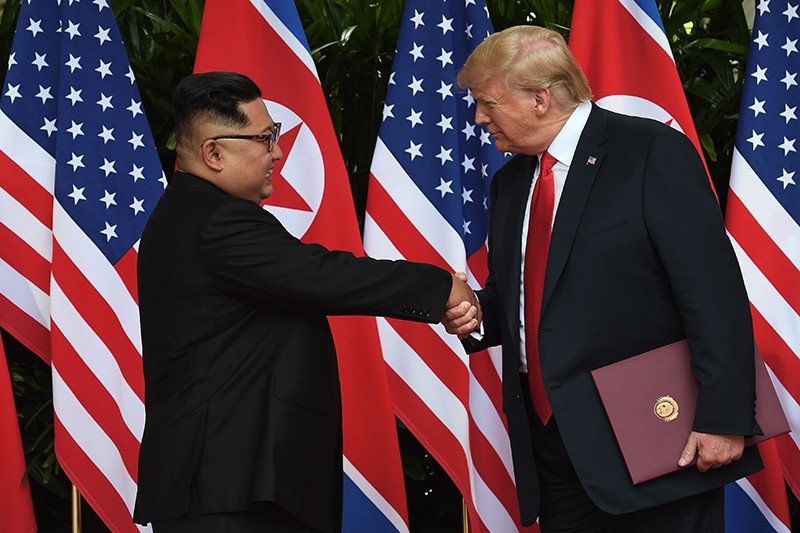 North Korea's leader Kim Jong Un (L) shakes hands with U.S. President Donald Trump (R) after taking part in a signing ceremony at the end of their historic US-North Korea summit, at the Capella Hotel in Singapore on June 12, 2018. (AFP Photo)
by Daily Sabah with Agencies Jun 12, 2018 12:00 am

Donald Trump and Kim Jong Un hailed their historic summit Tuesday as a breakthrough in relations between Cold War foes, but the agreement they produced was short on details about the key issue of Pyongyang's nuclear weapons.

The extraordinary encounter saw the U.S. leader shake hands with the third generation scion of a ruling dynasty, standing as equals in front of their nations' flags.

Kim agreed to the "complete denuclearization of the Korean Peninsula," a stock phrase favored by Pyongyang that fell short of long-standing U.S. demands for North Korea to give up its atomic arsenal.

After a day filled with smiles and compliments in the sumptuous setting of a luxury Singapore hotel that was watched around the world, the U.S. "committed to provide security guarantees" to North Korea.

Ahead of the meeting, critics expressed concerns that it risked being more about media headlines than substantive progress.

Asked about denuclearization -- the crux of the summit -- Trump said, "we're starting that process," adding that it would begin "very, very quickly."

But the text of the two men's agreement made no mention of previous U.S. demands for "complete, verifiable and irreversible denuclearization" -- jargon for scrapping weapons and committing to inspections.

Melissa Hanham of the U.S.-based Center for Nonproliferation Studies said on Twitter that North Korea had "already promised to do this many times," adding the two sides "still don't agree on what 'denuclearization' means."

In a news conference following the summit, Trump told reporters "the menace of nuclear weapons will now be removed," adding that "in the meantime, sanctions will still be in effect."

When asked about the timeline for denuclearization, Trump said: "It takes a long time to pull off complete denuclearization, but we will do it as fast as it can mechanically and physically be done. The sanctions will come off when we know the nukes are no longer a factor."

He defended critiques on the vagueness of the agreement saying "there was no time" to hammer out the details due to the short length of his visit. He added that the deal was "not a concession at all" and that it reaffirmed Kim's unwavering commitment to the complete denuclearization of the Korean Peninsula. He said the agreement would be verified.

He said another summit with North Korea would likely be necessary, but had not yet been arranged.

Trump also said the "war games" with South Korea would come to an end, saying he ultimately wants to "bring our soldiers home." He slammed the high costs of the U.S. military drills on the peninsula. Joint exercises with South Korea have long been a concern for Pyongyang, which previously threatened to cancel the Singapore summit over the issue.

Trump praised Kim, calling him "very smart, a very good negotiator who wants to do the right thing." He added that "very few people at his age could have done what he's done."

In neutral Singapore, the leaders, who had previously hurled insults like "mentally deranged" and "little rocket man," showered compliments on each other.

Trump said he had formed a "special bond" with Kim, whose regime has been accused of multiple human rights abuse and who is suspected of ordering the assassination of his brother at a Malaysian airport last year.

"We'll meet again," Trump said after a signing ceremony, standing with Kim on the verandah where they first met. "We will meet many times."

Trump said he "absolutely" would be willing to invite Kim to the White House.

For his part, Kim said the two Cold War foes had vowed to "leave the past behind," pledging "the world will see a major change."

It was a striking about-face from less than a year ago, when Trump was threatening "fire and fury" against Kim, who in turn scorned the American president as a "mentally deranged U.S. dotard." As it happens, the North Korean and the American share a tendency to act unpredictably on the world stage.

At the start of the day, the pair shared warm words and shook hands for several seconds, Trump reaching out to touch the North Korean leader on his right shoulder.

As they sat down for their tete-a-tete, the U.S. leader -- who had said he would know "within the first minute" if a deal would be possible -- predicted a "terrific relationship" with Kim.

After huddling for around 40 minutes, Trump and Kim were joined by senior advisors before breaking for lunch, where prawn cocktail, short-rib confit, soy-braised cod, and vanilla ice-cream were among the options.

The Singapore summit is a potentially legacy-defining meeting for both men -- comparable to president Richard Nixon's 1972 visit to China, or Ronald Reagan's 1986 summit with Mikhail Gorbachev in Reykjavik.

But many agreements have been made in the past with North Korea that have later fallen apart.

Trump shocked U.S. allies over the weekend when he used a meeting of the Group of Seven industrialized economies in Canada to alienate America's closest friends in the West. Lashing out over trade practices, Trump lobbed insults at his G-7 host, Canadian Prime Minister Justin Trudeau. Trump left the summit early, and as he flew to Singapore, he tweeted that he was yanking the U.S. out of the group's traditional closing statement.

As for Singapore, the White House said Trump was leaving early because negotiations had moved "more quickly than expected," but gave no details about any possible progress in preliminary talks. On the day before the meeting, weeks of preparation appeared to pick up in pace, with U.S. and North Korean officials meeting throughout Monday at a Singapore hotel.

The president planned to stop in Guam and Hawaii on his way back to Washington.

As he was trying to build a bridge with Kim, he was smashing longtime alliances with Western allies with his abrasive performance at the G-7. After his premature departure from Quebec, he continued to tweet angrily at Trudeau from Singapore, saying Monday, "Fair Trade is now to be called Fool Trade if it is not Reciprocal."

Trump advisers cast his actions as a show of strength before the Kim meeting.

Alluding to the North's concerns that giving up its nuclear weapons could surrender its primary deterrent to forced regime change, Pompeo told reporters that the U.S. was prepared to take action to provide North Korea with "sufficient certainty" that denuclearization "is not something that ends badly for them."

He would not say whether that included the possibility of withdrawing U.S. troops from the Korean Peninsula, but said the context of the discussions was "radically different than ever before."

"I can only say this," Pompeo said. "We are prepared to take what will be security assurances that are different, unique, than America's been willing to provide previously."