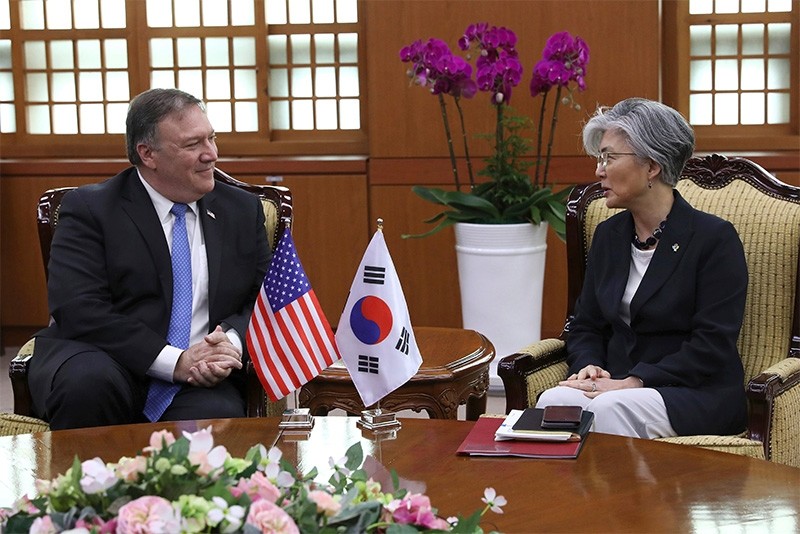 Large military drills between the United States and South Korea have been "suspended indefinitely," a senior U.S. official told Agence France-Presse on Thursday.

President Donald Trump on Tuesday said the U.S. will halt "war games" with its security ally Seoul, but he did not make clear when the freeze on the "provocative" exercises would kick in.

"Major military exercises have been suspended indefinitely on the Korean peninsula," the official said.

Trump's nominee to be ambassador to South Korea on Thursday backed the idea of a "pause" in major military exercises between U.S. and South Korean forces.

"The whole landscape has shifted, and I believe that we should give exercises, major exercises, a pause to see if (North Korean leader) Kim Jong Un is in fact serious about his part in negotiations," retired Admiral Harry Harris, who just stepped down as head of the U.S. military's Pacific Command, told a Senate hearing.

Harris said his understanding was that any suspension would involve only major military exercises and that regular training of U.S. forces in South Korea would continue, although final decisions were up to the Department of Defense.

"I'm convinced that our alliance commitments to South Korea remain ironclad and have not changed," he told the Senate Foreign Relations Committee.

America has about 28,500 troops based in South Korea and they routinely train with their local counterparts.

Ulchi Freedom Guardian, which ordinarily starts in August, is a two-week drill based on a computerized command-and-control exercise.

Pyongyang considers it a highly provocative rehearsal for invasion.

On Wednesday the U.S. military was looking at ways to ensure American forces in South Korea could still be fully trained and ready. U.S. officials said it was unclear what types of training involving U.S. and South Korean troops might constitute "war games" Trump wants halted. But big, joint U.S.-South Korean exercises appeared off-limits under the new guidance.

Trump on Wednesday hailed his meeting with Kim as having removed the North Korean nuclear threat, but Harris told the panel "I think we must continue to worry about the nuclear threat."

Harris also said he believed sanctions on North Korea should stay in place while denuclearization talks continue, echoing comments earlier on Thursday by U.S. Secretary of State Mike Pompeo. Pompeo, speaking in Seoul, said tough sanctions would remain until North Korea's complete denuclearization, apparently contradicting the North's view that the process agreed at the Trump-Kim summit would be phased and reciprocal.

While some Democrats on the Senate committee in particular expressed concern about the lack of specifics from Trump about the North Korean talks, the hearing was largely positive.

The post of ambassador in Seoul has been empty since Trump became president in January 2017, but would likely become pivotal as the United States seeks to put flesh on its broad agreement with the North.