US, South Korea agree to suspend military drill for August: US official 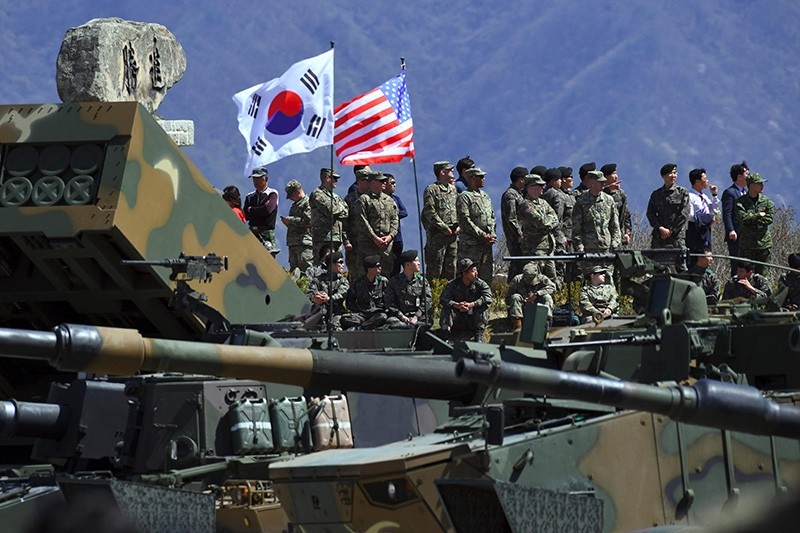 This file photo taken on April 26, 2017 shows South Korean and U.S. soldiers watching from an observation post during a joint live firing drill between South Korea and the US at the Seungjin Fire Training Field in Pocheon. (AFP Photo)
by Jun 19, 2018 12:00 am

"South Korea and the United States have agreed to suspend all planning activities regarding the Freedom Guardian military drill scheduled for August," according to a South Korean defense ministry statement.

It added that no decision had been made on other joint drills and the two countries would continue consultation on further actions.

A U.S. official, speaking on condition of anonymity, said the exercise "Ulchi Freedom Guardian" would be suspended in line with Trump's comments and an official Pentagon announcement was expected in the coming days.

Last year, 17,500 American and more than 50,000 South Korean troops participated in the Ulchi Freedom Guardian drills, although the exercise is mostly focused on computerized simulations rather than live field exercises that use weapons, tanks or aircraft.

The U.S.-South Korean exercise calendar hits a high point every spring with the Foal Eagle and Max Thunder drills, which both wrapped up last month.

The decision to halt military exercises in South Korea has bewildered many current and former U.S. defense officials, who only learned about it when Trump made his remarks.

They fear it could erode the readiness of U.S. troops in one of the world's most sensitive military flashpoints who have long prided themselves on being able to "fight tonight," thanks to heightened training.

Critics, including in Congress, warn that an end to joint U.S.-South Korean drills could also erode the effectiveness of the military alliance between Washington and Seoul. They also balked at Trump's justification that cutting drills would save money.