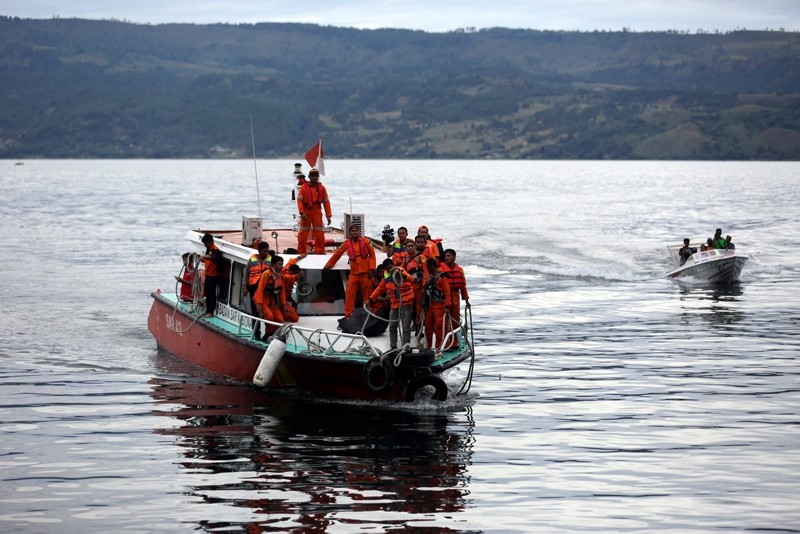 The captain of an overloaded Indonesian ferry that sank into the depths of Sumatra's Lake Toba has been detained by police for questioning over the deadly disaster, authorities said Thursday.

He was among just 18 people rescued after the vessel capsized and sank Monday afternoon at the picturesque volcanic lake, a popular tourist destination.

Three passengers have been confirmed dead.

But official estimates Thursday morning listed 193 others -- including children -- as missing, raising fears the sinking could be one of Indonesia's deadliest maritime disasters.

The traditional wooden boat is believed to have been operating illegally with no manifest or passenger tickets so officials have struggled to pinpoint the exact number of passengers.

They have relied on reports from survivors and the families of missing relatives who may have been on the doomed vessel.

The boat could have been carrying five times the number of passengers it was built to hold, along with dozens of motorcycles, officials have said.

Its captain, identified as Tua Sagala, is also the vessel's owner, police said.

"The captain of the boat is now with the police," national police spokesman Yusri Yunus said Thursday.

"But we haven't questioned him yet because he is still traumatised."

Top government officials including the national police chief and head of the search-and-rescue agency arrived at the scene Thursday.

Meanwhile, hundreds of grief-stricken people waited by the shore for news about the fate of missing loved ones.

Jadianto Nainggolan, 40, said a dozen relatives were on the boat including his three-year-old nephew.

Nainggolan showed a picture of the group to AFP that he said was taken shortly before they got on the ferry, which has not yet been located.

"We're hoping that our relatives will be found -- we're counting on the search and rescue agency," he said.

"But I don't think they're doing enough -- there seem to be more teams at the harbour than on the lake.

"There must be a lot of people trapped in the boat."

The search-and-rescue operation is now focused on recovering bodies -- including those still inside the sunken vessel.

It was not clear if any foreigners were on board.

Divers and underwater vehicles, along with about 400 personnel, have been deployed to search one of the world's deepest lakes.

Survivors have said the boat began shaking as it struggled to navigate strong winds and high waves about halfway into the 40-minute trip from an island in the middle of the lake to shore.

Popular with international and domestic tourists, Lake Toba fills the crater of a supervolcano that exploded in a massive eruption tens of thousands of years ago.

The disaster came just days after more than a dozen people were killed in an unrelated ferry accident in the Southeast Asian archipelago nation, where many people depend on boats to get around despite its woeful maritime safety record.

Traditional vessels -- like the one in the Lake Toba disaster -- are often packed beyond capacity.

They are rarely equipped with enough life preservers and are often in dire condition.

In 2015 a ferry sank off the coast of the island of Sulawesi, leaving 78 dead or missing.

More than 300 people are estimated to have drowned in 2009 when a ferry sank between Sulawesi and Borneo.