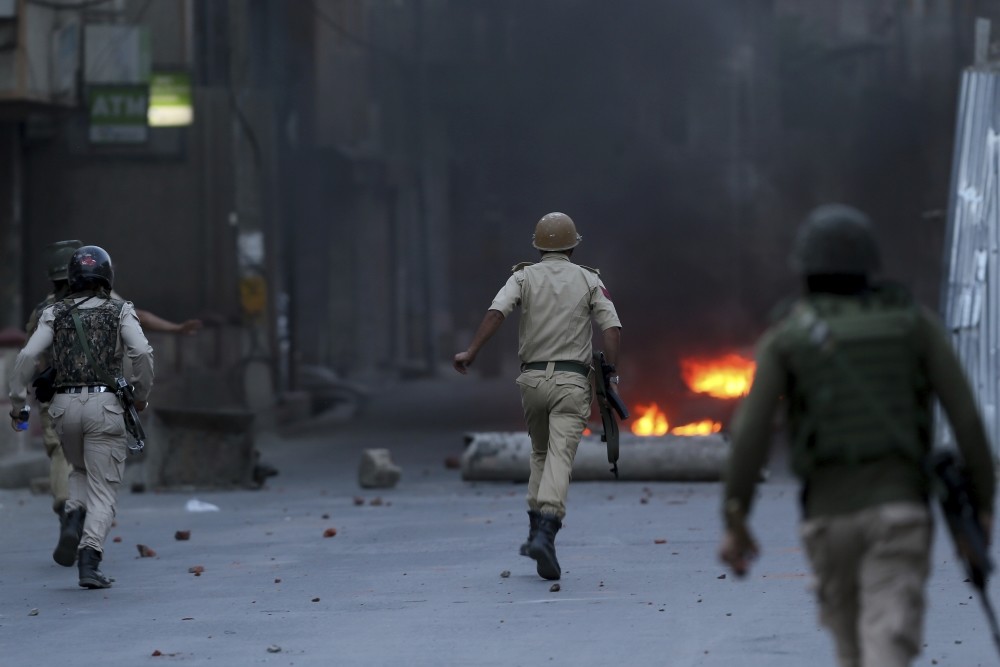 As one of the world's oldest disputes, violence escalates in Indian-occupied Kashmir with increasing protests and clashes

At least four Kashmiris, a counterinsurgency police official were killed during a gun battle in disputed Kashmir on Friday, triggering anti-India protests and clashes in which several people were injured. Government forces raided a cluster of homes on a tip that rebels were hiding in the southern Srigufwara area and they came under fire from militants, police said.

Police said a civilian husband and wife were hit by gunfire as soldiers cornered the rebels in the couple's house. Residents said the couple was not given time by government forces to leave their home. They were evacuated to a hospital where the husband was declared dead on arrival. Police said at least two soldiers were also wounded in the fighting.

As the fighting raged, protests and clashes broke out nearby and in other neighborhoods as residents tried to help the trapped rebels escape. Government forces fired shotgun pellets and tear gas at the stone-throwing protesters, injuring at least 20.Authorities suspended cellphone internet service in several districts in the region, a common practice to make organizing protests more difficult, and according to the government, stop the spread of rumors.

Large anti-India protests and clashes later erupted on the outskirts of Srinagar, Kashmir's main city, as thousands gathered to participate in the funeral of one of the rebels. Protesters, chanting pro-rebel slogans and demanding the end of Indian rule in Kashmir, blocked a major highway and fought pitched battles with government forces. Several people were reportedly injured in the clashes.

Kashmir, a Muslim-majority Himalayan region, is held by India and Pakistan in parts and claimed by both in full. A small sliver of Kashmir is also held by China. Since they were partitioned in 1947, the two countries have fought three wars, in 1948, 1965 and 1971, two of them over Kashmir. Also, in Siachen glacier in northern Kashmir, Indian and Pakistani troops have fought intermittently since 1984. A cease-fire came into effect in 2003. Some Kashmiri groups in Jammu and Kashmir have been fighting against Indian rule for independence, or for unification with neighboring Pakistan.

India's federal government took direct control of Kashmir state Wednesday after the ruling Hindu nationalist party ended its long-troubled alliance there with a Kashmiri political party. The shift to direct rule in the disputed region was approved after the Bharatiya Janata Party withdrew its support Tuesday for the People's Democratic Party, following years of feuding and a deteriorating security situation.

The dispute about Kashmir, one of the oldest on the agenda of the U.N. Security Council, along with Palestine, erupted between India and Pakistan in 1947. Since then, more than 94,000 Kashmiris have been killed during clashes, according to the Pakistani authorities. Pakistan has urged the international community to fulfill its moral and legal obligation by giving Kashmiris the chance to realize their inalienable right to self-determination in accordance with the Security Council resolutions.