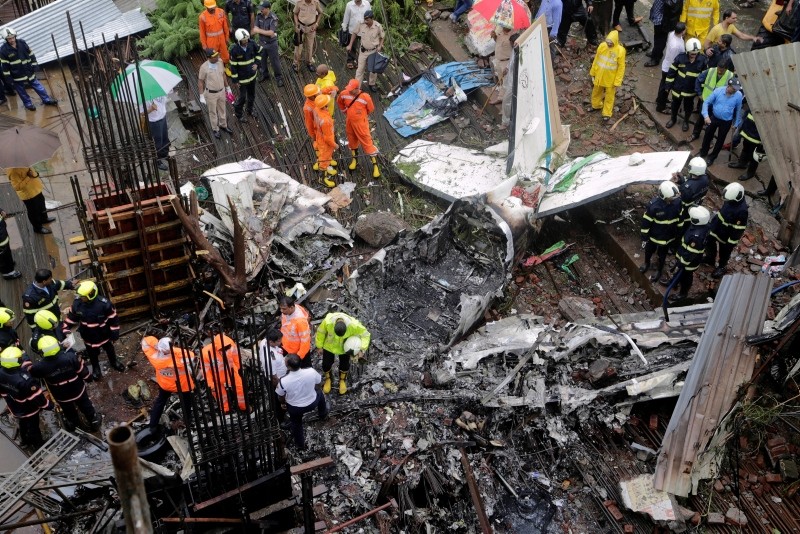 Rescuers stand amid the wreckage of a private chartered plane that crashed in Ghatkopar area, Mumbai, India, Thursday, June 28, 2018. (AP Photo)
by Compiled from Wire Services Jun 28, 2018 12:00 am

A small chartered plane crashed Thursday in a busy area of Mumbai, India's financial and entertainment capital, killing at least six people including two on the ground, police said.

They said the plane hit an open area at a construction site for a multistory building in the Ghatkopar district, a crowded area with many residential apartments.

"There was a huge explosion and the adjacent tree caught fire and the fire spilled on the streets," a man was quoted as saying on the NDTV news channel.

"Initially we assumed an electric box in the under-construction building must have caught fire but when we checked out the spot, we found the charred body of a man who apparently was on bike when the plane crashed," he added.

A woman, who was also not named, reported hearing three loud explosions and described seeing a "major fire."

Video footage posted online showed bright orange flames licking the side of a building next to a construction site.

Other images shot after the fire was put out showed firemen sifting through the twisted wreckage of the twin-prop plane as crowds looked on.

The white tailfin seemed to be the only recognisable part of the aircraft not consumed in the blaze.

India's Directorate General of Civil Aviation (DGCA) said the plane was a turbo-prop King Air C-90 and had been on a test flight from the nearby Juhu airstrip.

"There were two pilots and two aircraft maintenance engineers on board. All on board (the) aircraft along with one person on ground are dead," the DGCA statement read.