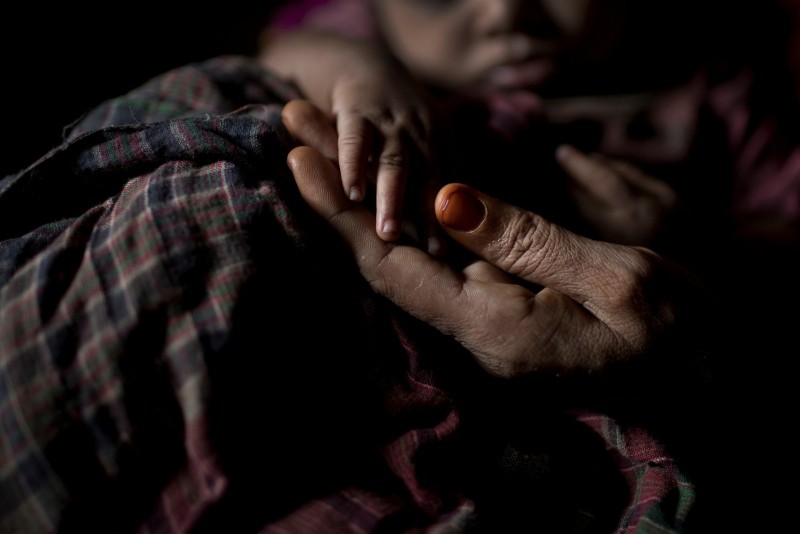 Tucked away in the shadows of her family's bamboo shelter, the girl hid from the world.

She was 13, and she was petrified. Two months earlier, soldiers had broken into her home back in Myanmar and raped her, an attack that drove her and her terrified family over the border to Bangladesh. Ever since, she had waited for her period to arrive. Gradually, she came to realize that it would not.

For the girl, a Rohingya Muslim who agreed to be identified by her first initial, A, the pregnancy was a prison she was desperate to escape. The rape itself had destroyed her innocence. But carrying the baby of a Buddhist soldier could destroy her life.

More than 10 months have passed since Myanmar's security forces launched a sweeping campaign of rape and other brutalities against the Rohingya, and the babies conceived during those assaults have been born. For many of their mothers, the births have been tinged with fear — not only because the infants are reminders of the horrors they survived, but because their community often views rape as shameful, and bearing a baby conceived by Buddhists as sacrilege.

Theirs is a misery spoken of only in murmurs. Some ended their pregnancies early by taking cheap abortion pills available throughout the camps. Others agonized over whether to give their unloved babies away. One woman was so worried about her neighbors discovering her pregnancy that she suffered silently through labor in her shelter, stuffing a scarf in her mouth to swallow her screams.

In Bangladesh's overcrowded refugee camps, A knew that hiding her pregnancy would be difficult and hiding a wailing newborn impossible.

She worried that giving birth to this child would leave her so tainted that no man would ever want her as his wife. Her mother took her to a clinic for an abortion. But A was so frightened by the doctor's description of possible side effects that she thought she would die.

And so she retreated to her shelter, where she tried to flatten her growing belly by wrapping it in tight layers of scarves. She hid there for months, emerging only to use the latrine a few meters away.

There was nothing to do but wait with dread for the baby who symbolized the pain of an entire people to arrive.

For the women who became pregnant during last year's wave of attacks in Myanmar, to speak the truth is to risk losing everything. Because of that, no one knows how many rape survivors have given birth. But given the vastness of the sexual violence — as documented in an investigation by The Associated Press — relief groups had braced for a spike in deliveries and scores of abandoned babies.

By June, though, the birth rate in medical clinics had remained relatively steady, and only a handful of babies have been found left behind. Aid workers suspected that many women had tried to hide their pregnancies, avoiding doctors

"I'm sure many have also died during the pregnancy or during the delivery," says Medecins Sans Frontieres midwife Daniela Cassio, a sexual violence specialist.

Yet sprinkled throughout the camps, you will find women who have grown weary of the silence. Ten such women and girls agreed to interviews with the AP. They consented to be identified in this story by their first initials only, citing fear of retaliation from Myanmar's military.

H, who had an abortion, was once so ashamed of her pregnancy that she told no one. In Myanmar, where the Rohingya people have few rights and Rohingya women even less, she had no voice. But here, she says, she feels she can finally speak.

"I don't want to hide anymore," she says.

The monsoon rains thundering down on the roof of A's shelter threaten to drown out her words. Her voice still has a childlike softness, and when she speaks of the soldiers who raped her, it fades to a whisper.

Already, several men once interested in marrying her have walked away when they've learned about the attack. And yet, with her parents' blessing, she leans in close to share her story.

One day in May, after months of isolation, her contractions began.

She was still a child herself, overwhelmed with uncertainty over what to expect. And she cringed at the thought of what others would say.

For hours, she labored on the dirt floor of her shelter, until at last, she pushed out a baby girl.

She looked down at the infant and began to shake. Gazing at her child, she saw beauty. But she also saw pain.

She knew she could not keep the girl.

Her father hurried to a clinic run by a relief group and asked them to take the baby away. An aid worker soon arrived to retrieve the infant.

She kissed her daughter's head and tiny hands. And then she tearfully handed the baby over.

She doesn't know who is caring for her baby now, but groups like Save the Children and UNICEF have found Rohingya families willing to take in such children. The organizations have placed around ten babies with new families, says Krissie Hayes, a child protection in emergencies specialist with UNICEF.

Sometimes, she says, an aid worker stops by the shelter to show her photos of her daughter.

"Even though I got this baby from the Buddhists, I love her," she says. "Because I carried her for nine months."

For her, giving the baby away was the right decision. It was the only decision.

But she aches for her still.