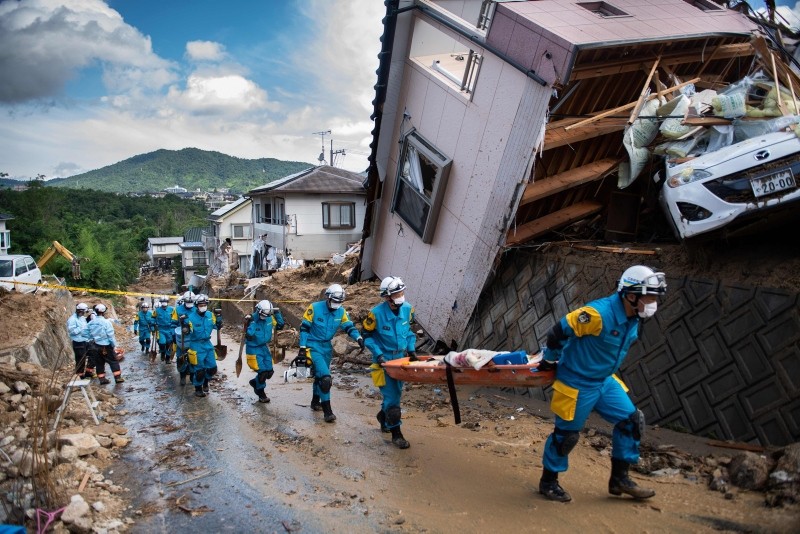 Police arrive to clear debris scattered on a street in a flood hit area in Kumano, Hiroshima prefecture, Japan, July 9, 2018. (AFP Photo)
by Compiled from Wire Services
Jul 09, 2018 12:00 am

The toll in days of devastating rains in southwestern Japan has risen to 100, the government's top spokesman said Monday, as search-and-rescue operations continued.

At least 100 people died or are presumed dead, with more than 60 still unaccounted for, most of them in the hardest-hit Hiroshima area.

The assessment of casualties has been difficult because of the widespread area affected by the rainfall, flooding and landslides since late last week. Authorities warned that landslides could strike even after rain subsides as the calamity shaped up to be potentially the worst in decades.

Some homes were smashed. Others were tilting precariously. Rivers overflowed, turning towns into lakes, leaving dozens of people stranded on rooftops. Military paddle boats and helicopters have brought people to the ground.

In large parts of Hiroshima, water streamed through a residential area, strewn with fallen telephone poles, uprooted trees and mud over the weekend.

Meanwhile, Japanese Prime Minister Shinzo Abe canceled an overseas trip from Wednesday that would have taken him to Belgium, France, Saudi Arabia and Egypt.