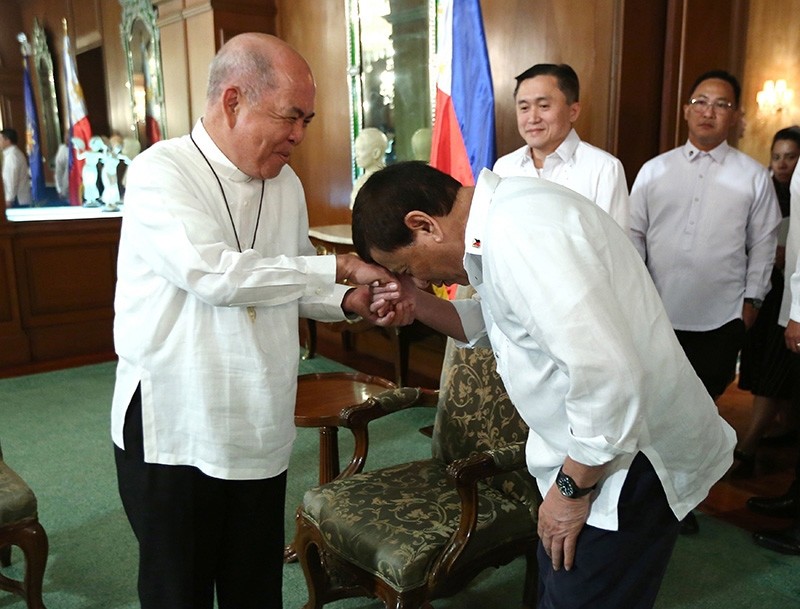 Philippine President Rodrigo Duterte has said he was "sorry" for calling God stupid, which has triggered public outrage in the predominantly Catholic country.

But the 73-year-old leader stressed that he was only apologizing to his "all-forgiving" God and nobody else.

"If it's the same God, I'm sorry," he said in a meeting with religious leaders on Tuesday night. "Sorry, God."

"I only apologize to God, nobody else," he added. "If I wronged God, then he would be happy to listen my apology. Why? My God is all-forgiving. Why? He does not remember past hurts. Why? Because God created me to be good, not to be bad."

In the video of the meeting released on Wednesday, Duterte also said that critics should not use religion or the name of God to attack his administration.

"Never ever use the name of God as a front to attack government because that is not proper," he said. "There is a separation of church and state."

Duterte called God stupid on June 22 when he questioned the logic behind the biblical creation story of Adam and Eve resulting in all the faithful falling from divine grace.

"Who is this stupid God? This son of a bitch is then really stupid," he said. He later said he would resign if anyone can prove to him that God exists.

Meanwhile, in the 80 percent Catholic country, satisfaction in Duterte fell to the lowest of his presidency since coming into office in 2016, an independent survey showed on Tuesday.

Net satisfaction, used by pollster Social Weather Stations (SWS) as a rating of the president's performance, was down 11 points from the first quarter to 45 in the survey of 1,200 Filipinos conducted in the last week of June.

It was the president's lowest rating in eight surveys taken since 2016. In the first quarter of this year, Duterte's rating slipped to 56 percent from 58 percent in December 2017.

Catholic bishops in the country on Monday called for fasting and prayers over Duterte's flippant remarks.

Archbishop Romulo Valles and the association of bishops that he heads called for a day of prayers on July 16 to invoke "God's mercy and justice on those who have blasphemed God's holy name, those who slander and bear false witness and those who commit murder or justify murder as a means for fighting criminality."

Starting July 17, the bishops asked Filipino Catholics to join bishops in three more days of prayers with fasting and almsgiving without giving other details.

Duterte has had a thorny relationship with Catholic bishops, who have criticized his bloody anti-drug crackdown and vulgar language and expressed alarm over the killings of three priests in brazen gun attacks in recent months. In televised speeches, the 73-year-old leader has often lashed out at Catholic bishops, recalling reports of sexual abuses by members of the clergy, including a foreign Jesuit priest, who, he said, fondled him and other fellow students in a Catholic university.