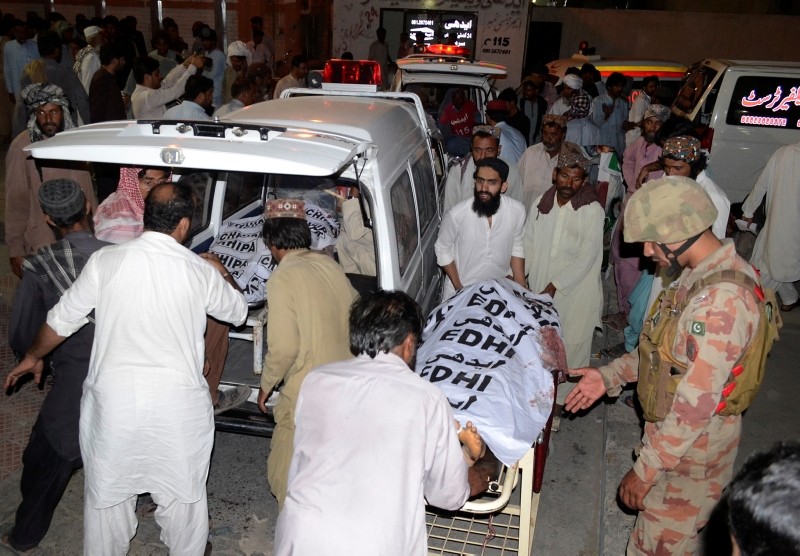 People taking bodies of bombing victims to their villages for burial at a hospital in Quetta, Pakistan, Friday, July 13, 2018. (AP Photo)
by Compiled from Wire Services
Jul 13, 2018 12:00 am

A suicide bomber targeting a political rally in southwest Pakistan on Friday killed 128 people, officials said, in one of the deadliest attacks in the country's history.

The blast — which was claimed by Daesh terrorist group — ripped through the crowd in the town of Mastung near the Balochistan provincial capital Quetta.

It was the latest in a string of attacks that have spurred fears of violence ahead of nationwide polls on July 25, and underscored the fragility of Pakistan's dramatic gains in security.

The dead included a candidate from Mastung, Siraj Raisani, a brother of the former Chief Minister Balochistan Nawab Aslam Raisani.

Raisani, who was critically injured in the blast, had been shifted to the hospital in Quetta but he could not survive, his brother and a former parliamentarian Haji Lashkari Raisani told reporters.

Police were not sure about the nature of the explosion however some local channels quoted eyewitnesses terming the incident as an "act of a suicide bomber".

"Mir Siraj Raisani succumbed to wounds while he was being shifted to Quetta," he added.

The injured included a candidate from Mastung, Siraj Raisani, a brother of the former Chief Minister Balochistan Nawab Aslam Raisani.

Raisani, who is in critical condition, has been shifted to a hospital in provincial capital Quetta, local broadcaster Express News reported.

Police were not sure about the nature of the explosion however some local channels quoting eyewitnesses termed the incident "act of a suicide bomber".

Earlier in the day, a suspected suicide bomber rammed his explosive-laden motorbike into a vehicle minutes after the end of an election rally in the remote Bannu district, bordering the restive North Waziristan tribal region, killing five people and injuring another 30.

Durrani, a former chief minister of the northwestern Khyber Pakhtunkhawa province, is running against Imran Khan, a popular former cricket star, in Bannu.

Durrani told ARY News that he was not at the venue when the blast occurred.

This was the second attack on MMA candidates in Bannu in the last two weeks.