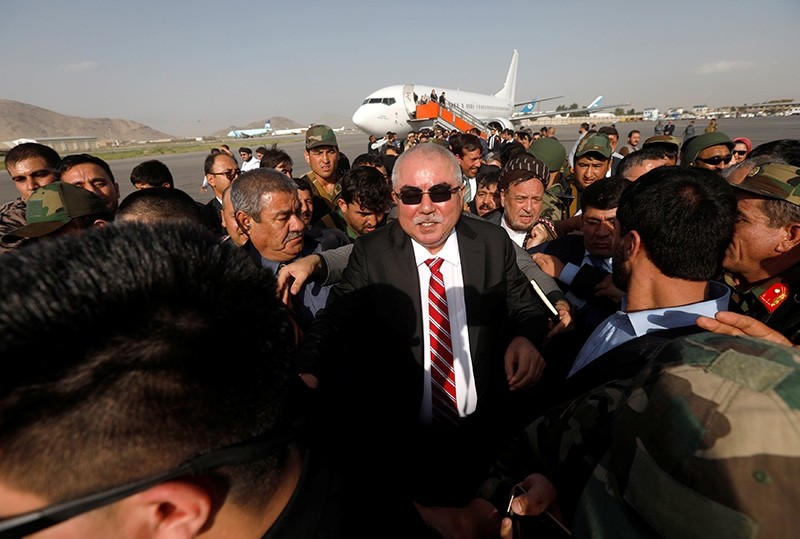 At least 14 people were killed and 50 injured in a Daesh-claimed suicide bombing at Kabul airport as Afghanistan's first vice president, the leader of the country's Uzbek minority, returned home after more than a year of living in Turkey, a Kabul government official said Sunday.

Gen. Abdul Rashid Dostum returned to the Afghan capital, Kabul, in mid-afternoon and will be given an official reception, presidential spokesman Haroon Chakhansuri said.

An explosion was heard as the convoy of vehicles was departing from the airport. But Dostum, who was traveling in an armored vehicle, was unharmed, said his spokesman Bashir Ahmad Tayanj.

An Afghan interior ministry spokesman said that 14 people, including both civilians and military forces, were killed in the suicide attack.

Spokesman Najib Danish added that 50 other people were wounded in the attack.

The Daesh terror group claimed responsibility for the attack through its Aamaq News Agency.

Afghan President Ashraf Ghani strongly condemned the attack in a statement released by the presidential palace.

Dostum had been undergoing medical treatment in Turkey, was now well and would resume work, the spokesman added.

Dostum's return comes amid protests in several provinces across northern Afghanistan -- his traditional support base.

Thousands of Dostum's supporters have taken to the streets in recent weeks, shuttering election and government offices and blocking sections of highways, demanding the release of a pro-government militia leader and calling for Dostum's return.

Dostum left the country under controversial circumstances in 2017, after the attorney-general's office opened an investigation into allegations that his followers had tortured and sexually abused a former ally turned political rival. He had since reportedly been prevented by the government from returning to Afghanistan.

It was not immediately clear whether Dostum will face any charges once home.

"The judiciary in Afghanistan is an independent body and would carry out its duties and responsibilities as it deems appropriate," said an official, speaking on condition of anonymity because he was not authorized to comment on the issue.

During his time abroad, Dostum formed a loose coalition with Atta Mohammad Noor, the former governor of Balkh province with wide support among ethnic Tajiks as well as Mohammad Mohaqiq, a leader of the Hazara minority.
Last Update: Jul 22, 2018 6:59 pm