India assures Muslims of 'justice' ahead of citizen list release 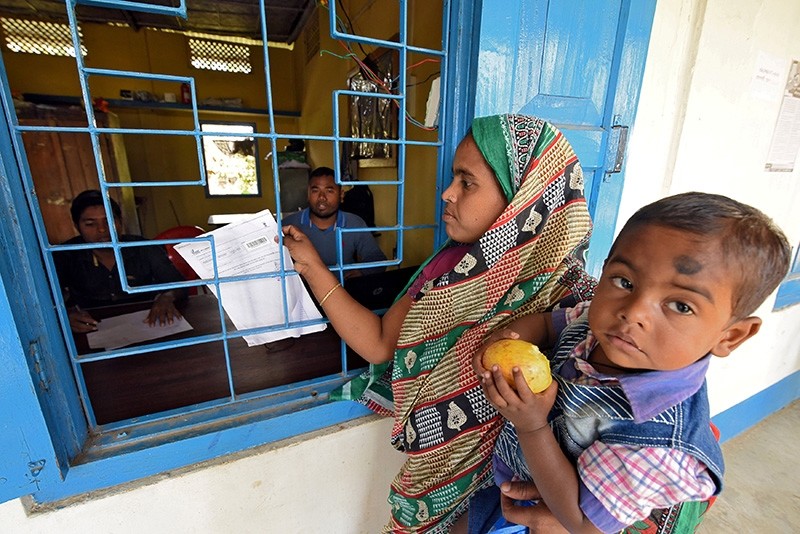 A woman carrying her son arrives to check her name on the draft list of the National Register of Citizens (NRC) at an NRC center in Chandamari village in Goalpara district in the northeastern state of Assam, India, Jan. 2, 2018. (Reuters Photo)
by Daily Sabah with Reuters Jul 22, 2018 12:00 am

India said on Sunday people whose names are missing from a list of citizens to be issued by northeastern India's largest state will not be detained, amid concerns that Muslims will be targeted under the guise of detecting illegal immigrants from Bangladesh.

"We will ensure that every individual gets justice and is treated in a humane manner. All individuals will have sufficient opportunity for all remedies available under the law," Rajnath Singh, India's interior minister, said in a statement.

"Any person who is not satisfied with the outcome of claims and objections can appeal in the Foreigner's Tribunal. Thus, there is no question of anyone being put in a detention center after the publication of NRC (national register of citizens)."

For an update of the NRC to be made public on July 30, all residents of Assam state in the northeast have had to show documents proving they or their families lived in the country before March 24, 1971, to be recognized as Indian citizens.

The exercise has created panic among many Muslims in Assam because Prime Minister Narendra Modi's Hindu nationalist party, which came to power in the state for the first time in 2016, vowed during the election campaign to act against illegal Muslim immigrants from Bangladesh.

In January, around 13 million people living in the border state were left of a draft list of the NRC.

Rights activists say the drive is also targeting Muslims who are Indian citizens, a charge the government denies.

Singh also said Assam had been asked to step up security so no one was harassed in the name of citizenship, and that there was no reason for panic.

Citizenship and illegal migration are volatile issues in tea-growing and oil-rich Assam, home to more than 32 million people, about a third of whom are Muslims.

Hundreds of people were killed in the 1980s in a violent protest by a native Assamese group.

Hundreds of thousands of people fled to India from Muslim-majority Bangladesh after it declared independence from Pakistan in 1971, setting off a nine-month civil war. Most of them settled in Assam and the neighboring state of West Bengal, where there are similar demands to send back illegal Muslim immigrants.

The migrants include many Hindus, but Modi's government has said they can apply for Indian citizenship.