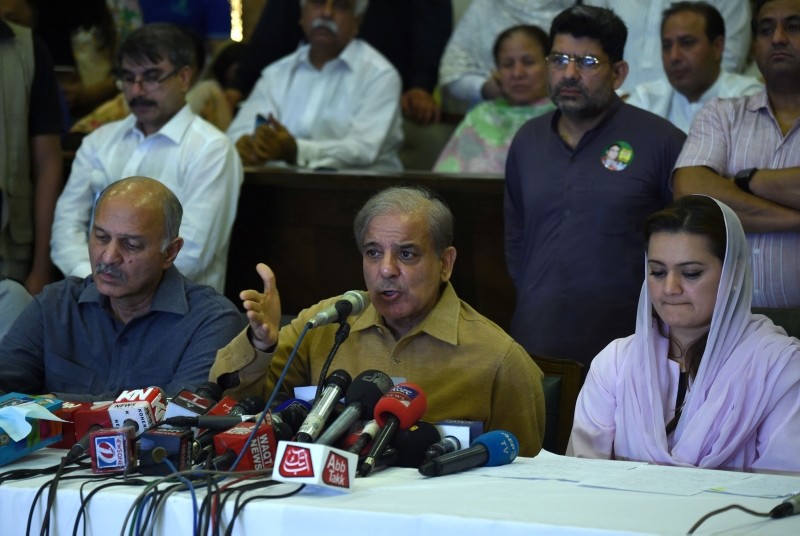 Shahbaz Sharif (C), the younger brother of ousted Pakistani PM Nawaz Sharif and the head of Pakistan Muslim League-Nawaz (PML-N), gestures as he speaks during a press conference at his political office in Lahore on July 25, 2018. (AFP Photo)
by Jul 25, 2018 12:00 am

One of the main candidates in Pakistan's election, Shahbaz Sharif, rejected the results of the poll Thursday as counting was still underway, alleging "blatant" rigging.

"It's such a blatant rigging that everyone has started crying. Today what they have done has pushed Pakistan back 30 years... We reject this result," Sharif, who leads the incumbent Pakistan Muslim League-Nawaz (PML-N), told a press conference in Lahore.

"People will not bear it," he added.

Shortly before he spoke state television said that just 18 percent of the vote had been counted so far.

But the campaign was marred by widespread allegations of pre-poll meddling by Pakistan's powerful military in favor of Khan, which saw the process dubbed Pakistan's "dirtiest election".

"This is not an election, it is selection -- to install someone of your own choice and to topple others," Mushahid Hussain Sayed, a senior PML-N leader, said at the press conference with Sharif.

The third major party in the race, the Pakistan Peoples Party (PPP), also raised alarms over the counting process on Thursday.

Many smaller parties have also rejected the results.

PTI supporters were already holding small celebrations in cities across the country, including Lahore, Islamabad, Multan and Rawalpindi, with fireworks, dancing and reports of celebratory gunshots.