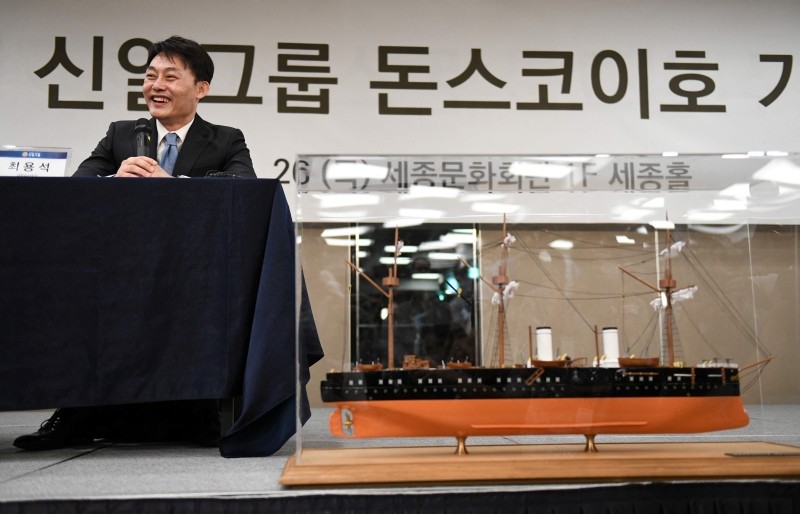 Choi Yong-seok, CEO of Shinil Group, speaks during a press conference on a Russian ,treasure, ship in Seoul on July 26, 2018 as a scale model of Imperial Russian naval cruiser the Dmitri Donskoi is seen. (AFP Photo)
by Compiled from Wire Services Jul 26, 2018 12:00 am

A South Korean company that claimed to have found the wreck of a Russian warship holding $130 billion in gold said on Thursday it has not verified the existence of any gold, while a financial watchdog said it was probing possible unlawful stock trading.

Shinil Marine said last week it had discovered the wreck of the Dmitrii Donskoi, a Russian armored cruiser sunk in 1905 after fighting Japanese warships off South Korea's Ulleung Island, and that a staggering 150 trillion won ($130 billion) of gold was on board.

However, the company backtracked on those claims on Thursday and apologized for having cited unverified news reports saying the ship held about 150 trillion won ($130 billion) worth of gold.

"The reports said the Donskoi held 200 tonnes of gold but that would only be 10 trillion won at current value," said Shinil chief executive Choe Yong-seok.

"We apologize to the public for the irresponsible citation."

Critics noted that in 2003 another firm had already sparked a stock bubble by announcing the discovery of the Donskoi, which sank in a 1905 naval battle against Japan.

On Thursday Shinil said it may have gone overboard on the claims and apologized for the "misunderstanding", saying speculation on the value of treasure contained within the ship was based on news reports and unverified documents.

Jeil Steel stock had hit 5,400 won ($4.82) but nosedived to around 1,785 won on Thursday, while Shinil replaced its board members and changed its name to Shinil Maritime Technology Co.

At the press conference, the company played a brief clip of underwater footage that appeared to show the ship, with the word "Donskoi" visible on the hull -- but it stopped short of entering the wreck.

Observers have also questioned whether the claims were aimed at funnelling investment into a virtual currency which Shinil Group in Singapore had recently started to issue.

He also said Jeil Steel is not associated with Shinil although Shinil's founder had acquired the stake in Jeil Steel before the discovery of the sunken ship.

Experts have said imperial Russia would have no reason to load vast treasure on a ship that was going into battle and have also noted that there was a safer land route to Vladivostok, the treasure's supposed final destination.

Shinil has yet to obtain government permission to raise the ship, which it said divers found more than 400 meters (0.25 miles) underwater off the eastern island of Ulleung. It's also unclear whether the company would able to claim ownership of the ship's assets even if it manages to retrieve them.