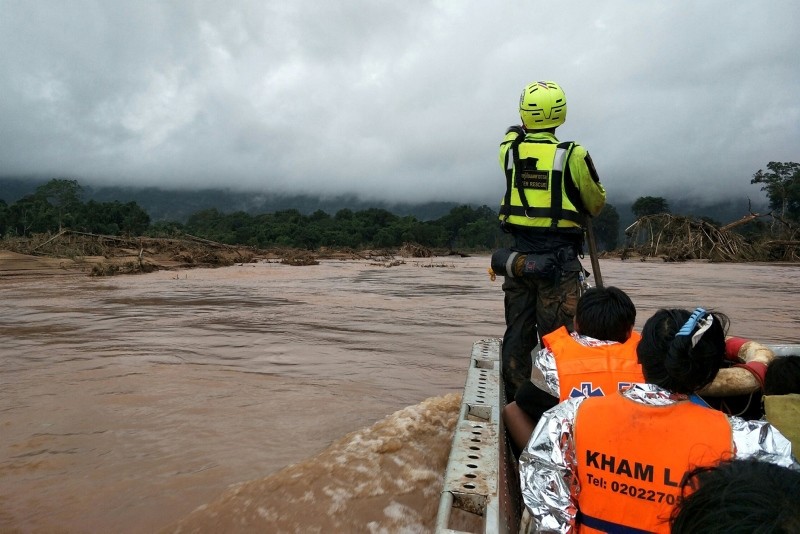 The rescue of a baby boy, terrified and hungry after days without food, has been captured in a viral video showing the infant survivor of a dam collapse in southern Laos being carefully carried through swirling flood waters and waist-high mud.

Footage of volunteers from Thailand rescuing 14 people, including the baby, was widely shared online when it was released Friday as an increasingly international relief mission scrambles to save lives in a disaster that has left scores dead or missing.

The group of survivors were stranded by flood waters after they fled up a hill on Monday as the Xe-Namnoy dam broke under heavy rain, leaving several villages devastated by flash floods.

The Thai rescue team, who waded several kilometers (miles) through rushing water containing uprooted trees and debris, are fresh from efforts to help free a youth football team trapped in a cave in the north of their country.

They have now come to help out in neighboring Laos, which is poorly equipped to deal with disasters of this scale.

"The boy is four months old. He didn't have fever but he was crying, maybe because of the cold weather," Kengkard Bongkawong, one of the rescuers, who is from Thailand's northeast, told French Press Agency (AFP).

"The baby was crying and looks terrified. Actually they were (all) still terrified of the rushing water."

The video had been watched nearly half a million times just hours after it was posted online on Friday.

Earlier this week officials said 27 bodies had been retrieved so far, with the country's prime minister reporting 131 missing.

But on Friday the governor of Attapeu province Leth Xiayaphone revised down the toll to five, saying the larger number previously given was "unconfirmed information."

Secretive Communist authorities in Laos are unused to international scrutiny and have blocked access to foreign media, complicating efforts to establish the exact death toll in a remote area.

The mystery over numbers of dead deepened on Friday with a resident of the badly-hit Ban Mai telling AFP that eight people are presumed to have died in his village alone as the water rushed in.

"Some were crushed by houses, others fell in the water when their boats capsized," Phuvieng Kumprasong, 54, told AFP based on eyewitness accounts from him, his relatives and other survivors from the village.

"But their bodies have not been found. It's very difficult job for rescuers, because of the water level."

It is just one of around a dozen villages battered by the flood surges.

The dam disaster has also raised serious questions over Laos' big bet on hydropower to propel it out of poverty.

Poor but rich in natural resources Laos has built or plans to complete dozens of dams on its waterways, mainly to send electricity to its energy-hungry neighbors.

But the projects have been criticized by environmentalists for damaging a once-pristine ecosystem and by rights campaigners for forcibly relocating thousands of villagers who receive scant compensation or reward from the hydropower schemes.