Final report on MH370 flight offers no new clues, unable to determine the cause of disappearance 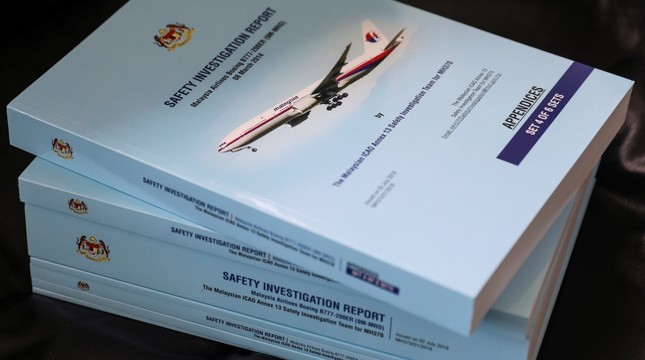 "In conclusion, the team is unable to determine the real cause of the disappearance of MH370," said Kok Soo Chon, head of the Malaysian safety investigation team at a press conference on Monday.

One of the key findings in the 495-page report was that the plane had turned back after leaving Kuala Lumpur for Beijing, according to data by civilian and military radars.

The U-turn was found to have been done by manual control, thereby putting to rest any theories that the plane could have been remotely hijacked.

However, the investigation team left open the possibility that there was "unlawful third party interference" in accounting for the pilots' decision to turn back.

The report also highlighted lapses by Kuala Lumpur Air Traffic Control (KLATC), saying they "did not comply with established procedures."

KLATC had failed to alert Vietnamese authorities that they were handing over communication with MH370 to Ho Chi Minh air traffic control, and did not continue to monitor the progress of the plane after the transfer of control.

The report also ruled out any mechanical anomalies with the plane, together with any possibility that the pilot was incompetent or suffering from mental issues.

The report's findings were met with disappointment by family members of those who were onboard.

"There is a lack of depth in the answers and no adequate answer to some pertinent queries," Grace Nathan wrote on Twitter, whose mother Anne Daisy was one of the victims of the plane's disappearance.

"We hope that all sides can continue to remain in close contact and coordination, to properly carry out relevant follow-up work," he told a daily news briefing, without elaborating.

The disappearance of MH370 remains one of the world's baffling aviation mysteries, when it vanished shortly after departing Malaysia for Beijing on March 8, 2014, while carrying 239 passengers and crew members onboard.

The mysterious disappearance sparked an international search that involved the governments of 26 countries, led by Australia, China and Malaysia.

On May 29, Malaysia called off a three-month search by U.S. firm Ocean Infinity, which spanned 112,000 sq km (43,243 sq miles) in the southern Indian Ocean and ended with no significant findings.

Malaysian and international investigators have been looking into why the Boeing 777 jet veered thousands of miles off course from its scheduled route before eventually plunging into the Indian Ocean.

Experts believe someone may have deliberately switched off MH370's transponder before diverting it over the Indian Ocean.

The last communication from the plane was from the Captain Zaharie Ahmad Shah who signed off with "Good night, Malaysian three seven zero", as the plane left the Malaysian airspace.

The only confirmed traces of the aircraft have been three wing fragments washed up along the Indian Ocean coasts.