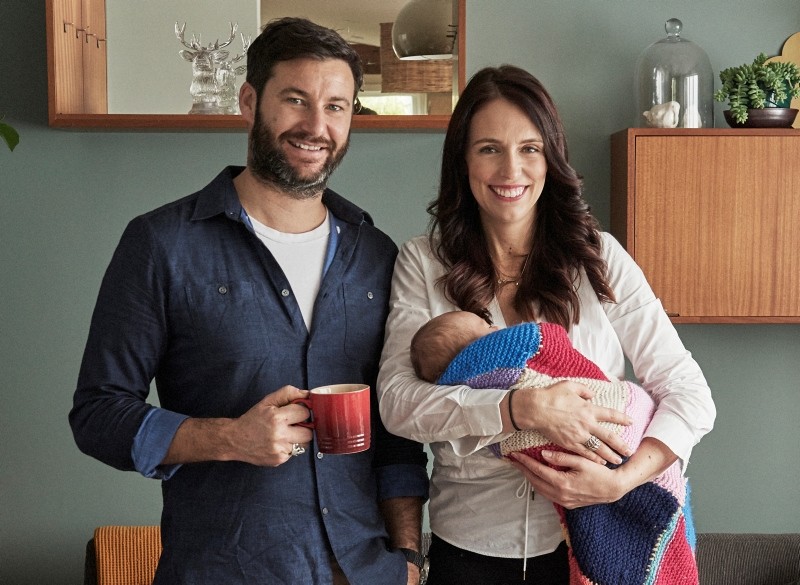 In this Aug. 1, 2018, photo supplied by Jacinda Ardern, New Zealand Prime Minister Jacinda Ardern, right, poses for a family portrait with partner Clarke Gayford and their baby daughter Neve in their home in Auckland, New Zealand. (AP Photo)
by Aug 02, 2018 12:00 am

New Zealand Prime Minister and new mum Jacinda Ardern, only the second world leader to give birth while in office, ended her maternity leave Thursday and immediately announced baby Neve will accompany her to the United Nations next month.

After six weeks bonding with her daughter, the 38-year-old said she was looking forward to getting back to work.

"Absolutely," she told TVNZ as she marked her first day back with a round of media interviews.

"I feel like I've been gifted by the New Zealand public, by my team and with the help of the acting prime minister this time to be with Neve, which has been wonderful.

"But of course, this is a unique circumstance and I'm really very keen to get back to work."

Ardern has opted to work from home in Auckland until the weekend when she will relocate to the capital Wellington.

She said that while she and partner Clarke Gayford want to protect the baby's privacy "at the same time we want to be a family and I do a very public job".

Gayford, a television fishing show host, plans to be a stay-at-home dad and the main caregiver for their daughter.

Ardern told stuff.co.nz they would travel as a family to the United Nations in New York, where she is due to speak.

"Perhaps fittingly the program for (the UN meeting) is focused on things like women, children, and climate change -- very strong themes in those areas," she said.

Rather than be concerned with affairs of state while on maternity leave, Ardern was "worrying about feeding, sleeping, and nappies and there's this overlay of (public) interest in what is actually something that is mundane".

"Something that every parent has gone through and yet I absolutely accept this layer of interest because it's not our normal yet. But one day it will be."

The birth capped an eventful year for Ardern, who became prime minister in October just three months after taking charge of the Labour Party as it languished in the polls.

While she announced her pregnancy five months before the birth, Benazir Bhutto -- the first world leader to have a child while in office -- told almost no one she was pregnant until her daughter was born in January 1990.

Unlike Ardern, who was able to take maternity leave, the Pakistani prime minister underwent a caesarean section and then returned to work.

During Ardern's absence, her deputy Winston Peters led the country. She resumed control when he left overnight for an ASEAN foreign ministers summit in Singapore.

Ardern said she will be "hitting the ground running" when she turns up at the office on Monday.

Her first week back will focus on issues that "really matter to me", including mental health, the environment, trade-related affairs and an "employment-related announcement".

With the veteran 73-year-old Peters at the helm, affairs of state ticked over quietly although business unease continues to quietly simmer in the background with a growing number of surveys showing a lack of confidence in the center-left government.

Ardern has said she is keen to work with business leaders and has been active in steps to rescue the Trans-Pacific Partnership trade agreement, with her government also pushing an aggressive trade agenda.