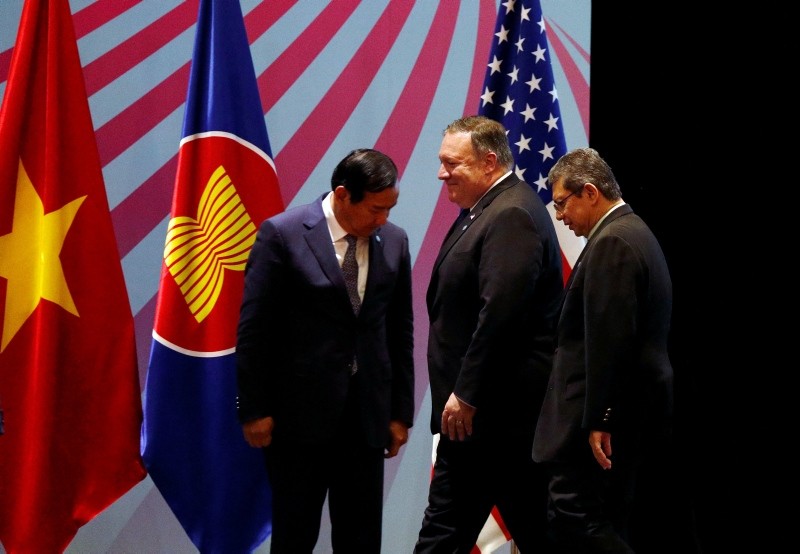 U.S. Secretary of State Mike Pompeo admitted Friday there was still "a ways to go" on North Korea as Washington seeks to push Pyongyang to move faster along the path towards denuclearization.

At his landmark summit with President Donald Trump in June, the North's leader Kim Jong Un signed up to a vague commitment to "denuclearization of the Korean Peninsula" -- a far cry from long-standing US demands for complete, verifiable and irreversible disarmament.

And when Pompeo met with North Korean officials in Pyongyang last month to flesh out the regime's commitment, they condemned his "gangster-like" insistence that the North move towards unilateral disarmament.

Arriving in Singapore ahead of a security forum, Pompeo said that "we still have a ways to go to achieve the ultimate outcome we're looking" for regarding North Korea.

His North Korean counterpart, Ri Yong Ho, is also attending Saturday's ASEAN Regional Forum, although it is not yet clear whether the pair will meet on the sidelines.

While there have been small signs of progress since the summit, news reports indicate Pyongyang is continuing to build rockets and there have been concerns that some member states are relaxing the enforcement of United Nations sanctions on the North.

At the forum and in meetings on the sidelines, Pompeo is expected to push key powers involved in efforts to curtail the North's nuclear ambitions to keep up sanctions pressure.

The annual forum, hosted by the Association of Southeast Asian Nations (ASEAN), brings together top diplomats from 26 countries and the European Union for talks on political and security issues in the Asia-Pacific.

The foreign ministers from all nations involved in stalled "six-party" negotiations with North Korea aimed at reining in Pyongyang's nuclear programme will be at the gathering: China, Japan, Russia, South Korea and the US.

Cutting off oil and fuel to the North would require enforcement primarily by China, which supplies most of North Korea's energy needs, but also by Russia, which delivers some oil to Pyongyang.

During talks with Chinese Foreign Minister Wang Yi, Pompeo "emphasised our shared commitment to the final, fully verified denuclearisation of (North Korea), as agreed upon by Chairman Kim," according to State Department spokeswoman Heather Nauert.

Wang praised the North's "efforts in promoting the denuclearisation process" and said China "hopes that the United States will take the DPRK's legitimate concerns seriously and meet the DPRK halfway," the report said, using the North's official acronym.

Iran, whose nuclear drive has also sparked international alarm, and North Korea are reported to have a history of cooperation in military and missile technology.

Pompeo is also focusing on another major regional flashpoint at the forum -- rival claims in the South China Sea and China's growing presence there.

China claims nearly all the strategically vital sea, including waters approaching the coasts of ASEAN members Brunei, Malaysia, the Philippines and Vietnam.

Tensions have mounted in recent years as China has built up artificial islands in the waters capable of hosting military bases, and the US has thrown its support behind Southeast Asian states whose maritime claims overlap Beijing's.

At a meeting with Southeast Asian foreign ministers Friday, Pompeo said the US appreciated ASEAN's efforts to "support the rule of law in the South China Sea."

China and ASEAN announced Thursday they had agreed on a draft negotiating text as part of efforts to forge a code of conduct to govern behaviour in the sea, which analysts said represented some progress after years of negotiations.